Almost every comedian has a story; and a reason why they chose to enter the unpredictable, frustrating, and sometimes demoralizing world of entertainment. Jonny Loquasto is no different. Raised in Pennsylvania, Jonny was what you would call "a fat kid," tipping the scales at around 170 lbs in the 6th grade. It was around that time he realized that having a sense of humor would be his best way to combat the ridicule and awkward social situations brought on by his childhood obesity.

It was also during those trying times that he discovered a show that would forever change his personality and his life goals, "In Living Color." As Jonny excitedly explains, "If it wasn't for In Living Color, I honestly don't know if I would have ever even tried standup comedy, let alone pursuing a career in entertainment and now releasing a comedy album that I'm incredibly proud of. The show was pure genius and it was something that my entire family would gather around to watch every Sunday night. Sure, I didn't understand some of the jokes, but I knew how groundbreaking that show was, not only for comedy, but for society as a whole. And now, the fact that I've been on shows with a few of the cast members of In Living Color over the years, it's completely surreal. If I ever get to meet Keenan Ivory Wayans, I'll probably bear hug him and thank him 100 times."

Even though Jonny knew at an early age what his goals truly were, he focused on education after high school receiving his Master's Degree in Physical Therapy from the University of the Sciences in Philadelphia. As he puts it, "I'm the go-to health care provider for anyone who gets injured in the comedy scene. I can fix the injury, and I never charge my friends. Hopefully I've accumulated a decent amount of karma points by now."

Now 12 years into his comedy career, Jonny decided to produce and release his new album completely on his own. He explains, "The way the industry is today, you really have to rely on yourself first. It's all about DIY. When I came up with the concept for the album, I knew it would be a long process, but it would be worth it in the long run."

Influenced by classics like Chris Rock's "Roll with the New," the string of incredible Adam Sandler albums in the 90's, and even the Jerky Boys, Jonny has always been a fan of variety albums more so than straight-forward standup comedy albums. Once he came up with an overall premise for the album, Jonny was introduced to an incredibly talented producer, Rick Rivera, and they hit it off immediately. Over the next 6 months, they would meet at Rick's studio whenever their schedules matched up and kick around as many strange ideas as possible. He also headlined one a night at the Brea Improv to record all of the standup comedy that you'll hear on the album.

The result? An album centered around a fictional late night talk show in which Loquasto is the host, sidekick, and every guest. Filling out the "show" is 47 minutes of standup comedy along with 5 songs, multiple commercials, a movie trailer, and even an infomercial carefully placed throughout totaling 71 minutes in what could be the most creative comedy album of 2017.

As Jonny explains, "I'm incredibly self-deprecating. Most former fat kids are. But I couldn't be prouder of this album. I basically bottled up everything that has been circling my brain over the past 12 years and tossed it into a mixing bowl and then the blender, and this is the result. It's unlike anything I've heard and I really think whoever listens to it will enjoy the standup, commercials, songs, infomercial, and especially the movie trailer. I mean, who doesn't want to make themselves the hero in a terrible action film?" 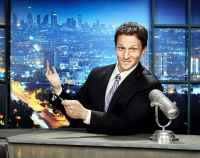 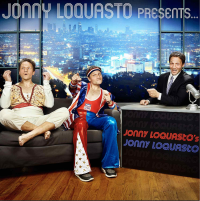