Travelers and outdoor enthusiasts are clamoring for HipStar™ ; a collapsible cart for all terrains which is also a practical backpack or even a bike trailer!

Minneapolis, MN -- (ReleaseWire) -- 11/21/2017 --The creators of HipStar™ have proudly announced that they developed a new type of travel cart that will redefine the way people carry their stuff on the go. HipStar™ is designed to handle tough terrain and reduce carrying weight by over 90% while hiking and traveling. It was designed to overcome the weaknesses of traditional wheeled luggage carts, which must be rolled across smooth surfaces in order for the wheels to function properly.

In contrast, HipStar™ features large wheels that are built to roll smoothly over uneven ground, completely hands-free, making it suitable for long treks in the outdoors.

The cart is collapsible, allowing hikers to use it as a cart or to fold it up and wear it like a normal backpack while climbing, crossing rivers, or traversing over large rocks. Designed with an active lifestyle in mind, the HipStar™ allows users to travel for longer periods of time without having to sacrifice any important gear.

Speaking of gear, one of the most innovative features of HipStar™ reduces a typical hiker's 30-40 pounds of gear to about 2.5-3.5 pounds of perceived weight while towing the cart. And the freedom to move the weight off your back, onto the ground, and attach it to the user via a belt harness, means that you can break into a run and have the cart follow you - all while preserving the "anti-gravity" effect that makes your gear feel practically weightless.

Another distinctive feature is a near total lack of disturbing inertial "push-and- pulls" generated by the hiker when walking due to well-formed combination of the harness' design, consisting of an adjustable belt and straps, and the two-way shock absorber rods, allowing for smooth movement, or even running, for long distance.

The HipStar™ will be available in light, medium, and heavy-duty versions to accommodate all categories of users. All versions of the cart are adjustable in height and width to accommodate users of all sizes. The cart's tow bars also adjust in length to ensure that the user's heels do not hit the cart while walking or even running.

The Kickstarter Campaign is located on the web at: http://www.kickstarter.com/projects/733349849/hipstar-the-worlds-best-hands-free-travel-cart and supporters from around the world can get HipStar™ by making pledges to this campaign. The goal of this project is to raise a sum of only $50,000 that will go towards finalizing the prototype and fine-tuning the product design. The very early backers ("super early birds") will receive a HipStar™ at 40% off MSRP as soon as the product is released to the public. For an additional $30 they will receive free customization, with their name put on the product when purchased. The company is also offering worldwide shipping so that the supporters from around the world can participate in this campaign.

"HipStar™ is a project of our passion in striving to help people achieve full mobility with only the power of two legs and accomplish physical feats they never thought possible and no matter if they are young or old, it will be an affordable way to make travels more enjoyable. We are convinced that the HipStar™ will be very successful because it solves a basic problem that millions of travelers, hikers, and adventure seekers face". Said Igor Koshutin, the Founder of HipStar™, while introducing the invention to the Kickstarter community.

Anyone who is interested may go directly to The HipStar™ Kickstarter campaign and HipStar web site www.hipstar.net (hit green PRE-ORDER button). You can find there lots of videos, images gallery, testimonials, and very detailed information about HipStar™.

About HipStar™.
HipStar™ is a futuristic universal collapsible luggage cart that will redefine the way people commute on foot with their stuff. Designed in the USA, it makes it easy to move heavy items over any type of terrain and can be used as a backpack or bike trailer if needed. The creators of this remarkable solution have recently launched a crowdfunding campaign on Kickstarter to raise funds and support, and they are welcoming everyone for generous backing. 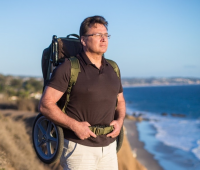