Oldenburg, Germany -- (ReleaseWire) -- 10/27/2016 --Most people are drawn to the idea of being able to magically levitate an object so that it hovers in mid-air. A new launch on crowdfunding platform Kickstarter could make this a real possibility as brothers Felix and Tammo Ripken prepare to launch their S-45 Levitation Display.

The device consists of a base and floating carrier-disc (or platform) which slowly rotates for effect and can hold up to 450 grams in weight. The carrier-disc hovers while suspended 45 mm above the base in mid-air, a phenomenon sure to evoke wonder and astonishment in many - or impress more scientifically minded observers.

The magnetic levitation is provided courtesy of a hybrid system involving passive magnets for lifting and small electromagnets for stabilization. The effect is even more dramatic because both the carrier-disc and the base can be concealed.

"There is nothing else on the market with this kind of power and lift height for the non-commercial market," said Felix. "We are looking forward to seeing what kind of amazing projects people come up with. Don't forget to send us some images!"

The high-performance levitation display will be launched on Kickstarter with a goal of 15,000. Felix is confident that the Levitation Display will impress and has invested his own money and almost a year's work in the prototype, which is now ready for production.

Currently, levitation devices can only hold small, light objects at a very short distance from the base and the object is usually the one with which they are sold. The S-45 Levitation Display can suspend any item, provided it weighs less than 450 grams. The carrier disc can be concealed inside the object to be levitated, for example, an airplane model, a space rocket, or a sports shoe, and the base can also be hidden or stored underneath a non-magnetic surface, a table, or a diorama for display purposes. The result will be like a special effect from a movie.

It is possible to customize the base with adhesive-backed vinyl and cloth covers, which can be changed as often as required. The floating disc is covered in matte black fabric with the option for Kickstarter backers to choose a removable, high-quality rubber cover. 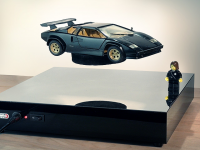 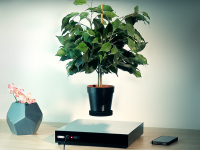 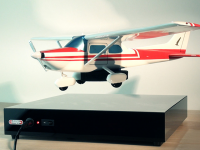 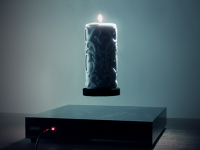 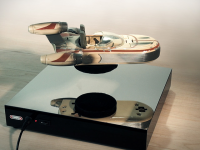 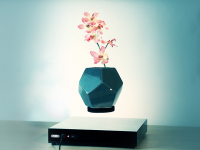 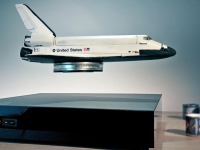