KIDD KARRIM continues to bring together exciting musicians to create a rich fabric of sound influenced by Afro-Cuban, Brazilian and Afro-American roots. PASSAGE IN TIME is this year's tapestry woven with the fibres of Funk, Jazz, Latin, Brazilian and Afro-Cuban music and unfolds a fusion of powerful, uplifting compositions that celebrate our inherent need to dance.

Marina Del Rey, CA -- (ReleaseWire) -- 09/27/2010 -- Can you say nuevo-latin, jazz, funk and fusion in the same sentence. Apparently so! A multi-talented musician-performance artist-videographer-designer, KIDD KARRIM describes her new "PASAJE - From There To Here" 12 track super dynamic CD as: Tjader meets Jobim meets Tito. If you love the music of the young, nuevo latin movement in Cuba like Charango Habanera, Klimax, Tito Puente, Cal Tjader, Chucho Valdez, or Astrid Gilberto and Sade, or Motown's Marvin Gaye, you're at the right place.

"No matter the style, you groove!!! "
Kidd Karrim shows that she is fully in touch with her powers of musical expression, on the new Pasaje C.U.B.A. released album, KIDD KARRIM Latin Jazz PASAJE - From There To Here creating an astounding blend and delicate balance of the high-energy powerhouse and intensity of Latin-Jazz-Fusion, in combination with deep soulful smooth-groove funk, taking us on a musical journey of diversity of styles, with the one poignant constant, "the groove".

Karrim's latest project brings her into the spotlight after a long career as an artist, multi-discipinary performer and ethno-music teacher to all ages. Always influenced by the funky rhythms of greats like James Brown, Motown artists, Brazilian greats like Gilberto Gil, Antonio Carlos Jobim, and the Afro Cuban impact of Tito Puente, Mongo Santamaria, or Chano Pozo who; in collaboration with Dizzy Gillespie, had the first concert featuring an American band playing Afro-Cuban jazz. The rest was musical history, which goes back further to Cuban Isreal "Cachao" Lopez whose contribution to modern music began in the 1930s when, with his brother Orestes Lopez, improvised with traditional music and his experimenting with Afro-Cuban music developed a new sound that became the "mambo". Talk about history!! From Juan Formell and Los Van Van, to the new sounds of contemporary groups like Klimax, Charanga Habanera and the new "timba feel" to the soulful tracks of Sade, Astrid Gilberto and Aretha Franklin, PASAJE demonstrates these influences as a mega-culture recording containing a multi-style, inspiring collections of instrumentals, vocal compositions and songs.

Kidd Karrim's PASAJE - From There To Here takes her audience on a journey from the dynamic, latin textures of Chucho Valdez's "Mambo Influenciado", Haakon Graf's "Que Paso" to Brazilian flavoured "O Morro Nao Tem Vez" and nu-jazz almost classical stylings of compositions like "Concepcion"; melting next to slow funk grooves of some memorable songs and many more. Her crew of amazing musicians create ripping grooves, and exciting, magnetic solos, weaving a tapestry with the fibres of Funk, Jazz, Latin, Brazilian and Afro-Cuban music to unfold a powerful FUSION, celebrating our inherent need to dance. PASAJE - FROM THERE TO HERE will ignite your desire to "Turn On The Groove - Get Your Body To Move", and keeps your interest with its fusion of Cuban timba, latin jazz, rhythmic pockets, floating Brazilian feels, and its locked- in deep, smooth funk that give a hypnotic release from its pulsing, dynamic Afro-Cuban numbers.

Bring the players together and FUSION TAKES A LIFE OF ITS OWN!
Karrim surrounds herself with and features the long-time, creative saxophone genius of Gary Bartz, (NTU Troop), the "Cuban-timba-attuned" keyboardist Haakon Graf, the outstanding percussion talents of Brazilian virtuoso Celso Machado, the amazing Cuban congero, percussionist and timbero Jose Sanchez of Havana, Cuba, as well as the Motown, Jazz Rock veteran, Tony Newton. Her CD is loaded with heavy- weight, mega-gifted players and composers.

Kidd Karrim's PASAJE is a life journey of musical callings From There To Here.

Pasaje C.U.B.A. announces a "FREE" Full Album or MP3 Single Download of the new KIDD KARRIM "PASAJE" CD. We feel that the best possible endorsement or review is best heard from the listeners. This is a complete win-win synergy between artist and fans.

*** Listen to the full album or any individual song or instrumental and write a music review. If Pasaje Cuba likes it and uses it in our press material, you will receive a "FREE" KIDD KARRIM Latin Jazz album and all the bonuses or MP3 single download from Kidd Karrim and Pasaje C.U.B.A. - Cultures United By Arts. To qualify for the free download, the album review must be 120-200 words; any single review, 50-75 words. If accepted you will receive the download codes. All submissions are responded to.

To begin
(1) got to: http://music.kiddkarrim.com
(2) email your review to PasajeCuba@yahoo.com with the words "KK Review" in the subject field.

PURCHASE KIDD KARRIM Latin Jazz "PASAJE - From There To Here"

Turn On The Groove - Let The Body Move 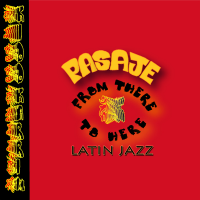