KillerGuides Adds World of Warcraft: Mists of Pandaria Guides to its Expanding Library of MMO Manuals

KillerGuides, an online game guide publishing company since 2006 launches its newest guides for World of Warcraft. Below is a brief summary of the types of details expected to be in the guide.

Sao Paolo, Brazil -- (ReleaseWire) -- 09/11/2012 --Blizzard Entertainment is about to release yet another expansion to their growing World of Warcraft expansion portfolio. On September 25, 2012 Blizzard introduces Mists of Pandaria that introduces gamers to the hidden island, Pandaria inhabited by the Pandaren, a neutral race amongst the vicious Horde versus Alliance war. In addition to adding the newest expansion, Blizzard adds in a new playable class: the monk. Preparing for this year's biggest MMO event, KillerGuides offers two new and unique guides to their expanding library of game guides.

Mists of Pandaria features a revamped game mechanics and now offers World of Warcraft fans with a smoother gaming experience in contrast from previous expansions. With much improvement and tweaking, KillerGuides produced the Mists of Pandaria Guide to accommodate the changes in the game. Featured in the unofficial expansion manuals are details about quests, dungeons and explicitly researched walkthroughs for readers. The manuals are written by veteran gamers and professional writers who in combination share their gaming experience and self-found tactics for PvP, PvE, Challenge Modes and more. The topics in the guide heavily cover walkthroughs—which is essential not only for newbies but for experienced gamers to cut down on the learning curve and quickly get into the gist of Mists of Pandaria. Next, there are ability and skill breakdowns plus additional builds and skill rotations for players to reference. With this being said, an effective build is the key to success in WoW. If players wish to become one of the top elite gamers on their server it is best to read and reference past player's experiences.

Such strategies for the newest class, the monk can be read in the Monk guide by KillerGuides. With dedicated gamer writing each of the Pandaria guides, readers get to learn from a fellow gamer's perspectives as oppose to learning certain tricks and tactics on their own. Examples of monk builds is written in the guide demonstrating the types of skills to effectively applied in skill rotations. Also, the guide covers PvP strategies for the avid gamer including equipment set-ups and a list of consumables to enhance the player's performance. In addition to tactics for successful battle outcomes and to quickly level up, the guides contains a section dedicated to gold farming tactics.

Blizzard Entertainment schedules to release Mists of Pandaria on September 25, 2012 introducing a new environmental setting, taking place in Pandaria. Practicing martial arts and harnessing Chi, the Pandaren race and the monk are the two new additions to World of Warcraft. Not only did Blizzard introduce a new, fresh class but Blizzard also made changes toward existing classes. Needless to say, Mists of Pandaria will become a fresh new addition to World of Warcraft.

About KillerGuides
KillerGuides is a game guide company established in 2006 that provides players with game guides for various MMOs including big hit titles such as Aion, SWTOR, World of Warcraft and so forth. KillerGuides guide library is constantly expanding to accommodate new strategies, gold making tips and most importantly, provides players with top-notch leveling recommendations. Adding Mists of Pandaria to its growing WoW library, gamers can easily reference these easy to read e-books and spot an immediate difference in the way they play the game. The Mists of Pandaria and Monk manuals are available at $34.99 USD and $29.99 USD respectively. The shop also offers gamers the option to get all their WoW references in one go at much discounted price of $89.99 USD. For more information about the references, visit the KillerGuides shop. 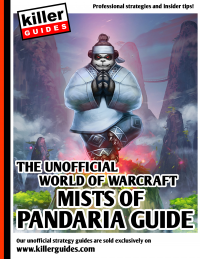