In keeping with the Kors tradition of producing exclusive editions of their premier vodka, Kors Vodka announces a new wedding gift collection just in time for the summer wedding season.

Los Angeles, CA -- (ReleaseWire) -- 04/27/2015 --A Special Vodka for Special Occasions, is how Kors Vodka describes their new wedding gift program. Considered by connoisseurs of fine spirits to be the purest vodka in the world, Kors Vodka has risen to a position of prominence and celebration since its reintroduction. The origins of this sophisticated-tasting vodka are as prestigious as its price tag. The last of the Russian tsars, Nikolas II Alexandrovich Romanov was said to have commissioned the recipe himself, choosing from over 3,000 recipes and distillation processes until they arrived with what today they call Kors Vodka. The closely guarded recipe incorporates over 12 different species of grain, water from the Italian Alps and is processed utilizing aspecial diamond distillation and gold filtration technique. Such elegant and aristocratic beginnings dictate the exact type of VIP service that Kors seeks to deliver with their wedding gift program.

Kors Vodka Wedding Gift Collection promises more than a limited, once in a lifetime gift. It defines an experience. The purchaser may choose from three distinct bottles with iconic 24 carat gold decoration, hand applied with Old World craftsmanship on the finest in hand blown crystal. Long after the vodka is gone, the happy couple will continue to share in the memories of their special day. The vodka will be hand delivered to the wedding or party in a high end polished Walnut box, resting on black Persian silk, and lying beneath a personalized gold plate. Everything about their new wedding gift collection feels luxurious, from the design of the bottle to the clear taste of the distinctive liquid inside. It is truly a gift fit for a king.

Such royal treatment comes also with royal prices. Kors limited editions begin at $12,500 for their Silver Edition and end with their illustrious, 24k George V Edition at $24,500 a bottle. It is the company's position that Kors is more than a vodka; it is a once in a lifetime experience. Kors Vodka representatives have keep the company's elite clientele a closely-held secret, but it is acknowledged that the vodka is gifted between celebrities and business professionals with discriminating tastes.

"We are a company that adores traditions and embraces those once in a lifetime opportunities," says the Kors spokesperson. "The recipe and the vodka was discovered by chance, and Kors believes that our vodka retains that elegant sense of mystery that is so tightly woven with the Romanov dynasty. What better way to contribute to the fantasy of 'Happily Ever After' than with Kors?"

The Kors Wedding Gift Collection is limited to ensure that each and every purchase receives the type of grand experience the name Kors promises. Tsar Nicholas II once thought to endow his cousin King George V of England with the finest Russia had to offer by creating a special bottle, case, and courier. Kors Vodka hopes to translate that same expression of love and pride with their wedding gift VIP program.

For more information about the Kors Vodka Wedding Program, visit the Kors Vodka website or speak with one of their exclusive Wedding associates. Media inquiries may be made through the website using the "Contact" form provided on the website.

About Kors Vodka
Kors Vodka is World's most exclusive Vodka brand. It was names after a small batch of vodka with cross symbols that was found in the middle of Finland. The shipment was meant for George V, The King of England and was a gift from his cousin, Tsar Nicholas II of Russia. The exquisite taste of Kors Vodka is obtained through a complex distillation process that allows only a small quantity of Vodka to be produced each year. The water from the Italian Alps and hand selected grains from 12 countries are processed in the gold tubes via diamond distillation guarantees the smoothness of taste. The luxury drink is placed into an exclusive Kors bottle created of the finest crystal. 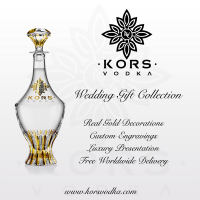