The Congressional briefing held on November 16, 2018 brought together America's top farmers and food producers along with American Humane, the largest animal welfare certifier in the world, to discuss advances in humane agriculture. The briefing took place on Capitol Hill just before Thanksgiving, which has become a day when many Americans are thinking about how their food gets to their tables. Kreider Farms was invited by the American Humane Association to testify as a leading American Humane Certified egg producer.

The Congressional Humane Bond Caucus was co-founded in 2015 by Congressmen Gus Bilirakis (R-FL) and Henry Cuellar (D-TX) with the stated objective of creating a more humane world for both animals and people.

About Kreider Farms
Noah and Mary Kreider started small with 102 acres of land, a dozen dairy cows, and 200 chickens when Kreider Farms was born in 1935. Now under the leadership of third-generation President and CEO Ron Kreider, Kreider Farms is still very much a local, family-owned farm, but it has expanded to over 3,000 acres in Lancaster, Lebanon, and Dauphin Counties. The 450-employee enterprise has more than 1,600 cows and over 7 million layer hens. To learn more, visit https://www.kreiderfarms.com. 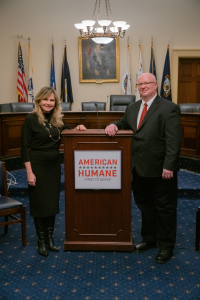