Nashville, TN -- (ReleaseWire) -- 03/12/2014 --Colt Records has announced the release of a new single from artist Kristi Stafford called "You Just Won't Do". It is the follow-up single to her, Trophy Wife, which has charted on numerous charts and remained on those charts for over 20 weeks reaching the #1 spot on Indie World Country in February.

Both songs were written by Marietta Wilk who also wrote the storyboard and co-directed the video for Trophy Wife which can be seen on VEVO, CMT and many others. A You Tube version of the song can be seen here:

Colt Records President J. K. Coltrain says. 'We are all so very excited at the response we received from Trophy Wife and I believe that Kristi might very well have herself another hit with You Just Won't Do. Not to mention Marietta is already making plans for a sequel for Trophy Wife which we are all awaiting with great anticipation'.

You can find Kristi's new single by visiting the label's website at; http://www.coltrecords.com

Media requests should be sent to; staff@coltrecords.com

About Colt Records
Colt Records are a small independent label that was started back in 1998 by country singer & songwriter J. K. Coltrain and a group of trusted friends with offices located in Nashville, Tennessee. 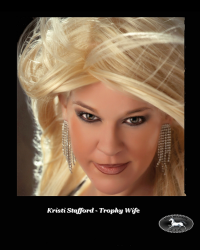