KRUSING AMERICA, Winner of over 50 Awards, Has Been Acquired for Worldwide Distribution by Global Genesis Group

Henderson, NV -- (ReleaseWire) -- 04/11/2016 --KRUSING AMERICA, the multiple award-winning docu-series, was acquired for worldwide distribution by USA based Global Genesis Group LLC. KRUSING AMERICA is a family TV docu-series about an American hero without an American hometown. When lifetime military man Lt. Colonel Victor Krus and his family return to America, they are without a place to call home. KRUSING AMERICA follows the Krus family as they crisscross the country on a quest to find a town that they will love. KRUSING AMERICA offers a straight from the headlines twist on the classic story of coming home. Global Genesis Group will bring their acumen of worldwide distribution to maximize KRUSING AMERICA's brand recognition.

Award-winning director Linda Kruse presents this multi-award winning series designed to touch the hearts of viewers, ignite the pride of its citizens, and inspire a country. "I originally created KRUSING AMERICA as a documentary about my brother Lt. Colonel Victor Krus, his wife and children and their journey around America searching for the best place to raise their family. I wanted to create content that can be enjoyed by parents and kids together. It became a much larger story so I broke it into a series. I've been completely astounded at how well received KRUSING AMERICA has been at festivals all over the world. Not only has it won over 50 Awards at festivals around the United States but most recently in France, England, Germany, Canada and Indonesia. I'm in awe at how a small feel-good American family series could have such a wonderful impact on the world," Kruse said.

Charles Morris Jr., VP of Development of Acquisitions said, "This is one of the most exciting TV events that Global Genesis Group has signed to distribute. Not only has KRUSING AMERICA won dozens of awards including Best Documentary Series winner from the International Family Film Festival (IFFF), but also it's about a true-blooded American family with strong American values. The series is presented beautifully by the award-winning director Linda Kruse who's won several top awards for directing including "Filmmaker of the Year" and Best Director at the "World Documentary Awards". It's a fun watch, and the Krus family brings us into their journey across America, not only touching our hearts, but they reveal an America that seems long lost. Linda Kruse shows us an America that is full of people and places with heart and soul, it is an America that we all want to live in."

Director Kruse stated, "The quality and interactiveness of KRUSING AMERICA allows sponsors, distributors and fans to participate in a multi-award winning series that has an international appeal for families everywhere. With the recent partnership of Global Genesis Group I know that this series will not only have a broader reach in the world from a distribution standpoint, but our hope is to also find the next KRUSING AMERICA family for Season 2 and continue for years to come." 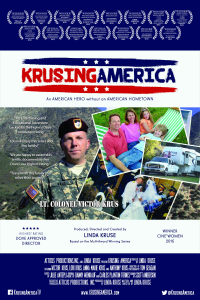