Beverly Hills, CA -- (ReleaseWire) -- 11/08/2019 --Now, the upcoming superstar, has announced some of the details of his next release. 'Want Me Around' will be released on Black Friday November 29th. Which he posted on his Instagram today.

"As promised my new single 'Want Me Around' drops Black Friday! 11/29/2019 " he wrote on Facebook and Instagram with a preview to the song, which is quite the surprise with thanksgiving only around the corner!

Kyd Knarly spent most of the summer working on new music for his fans and promised that this single is going to be one not to be missed and may possibly be one of the most explosive songs yet! his aiming high. As we seen with breakout star Lil Tecca his second single "Ransom" was his breakout single that made it onto the Billboard Hot 100 charts debuting at 93 before peaking at the 4th spot. Could we be seeing this from Kyd Knarly's new single 'Want Me Around'?

He recently said in an interview on podcast 'Double Barrel Brothers Podcast' "Everything I'm doing in my music now, I don't feel like I've hit my prime yet imagine what's to come once I expand more!"

Kyd Knarly is certainly on the rise and one to look out for as his first single has amassed hundreds of thousands of streams since being released and his fanbase is eagerly awaiting his new single to drop on all major platforms in the coming weeks. 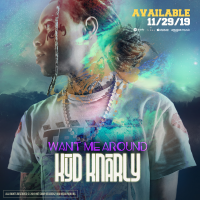