Lea DeLaria, Star of "Orange Is the New Black" and Broadway's "On the Town" Makes Art House Debut in Provincetown July 11 & 12

Known as Big Boo in the Netflix hit series "Orange is the New Black," star also won Obie and Theatre World awards as Hildy in revival of Broadway's "On The Town."

Provincetown, MA -- (ReleaseWire) -- 07/10/2015 --"Orange is the New Black" star Lea DeLaria will make her anticipated debut with the celebrated Broadway @ The Art House series in Provincetown, MA, produced by Mark Cortale, for two shows only on Saturday, July 11 and Sunday, July 12, with series host and SiriusXM radio star Seth Rudetsky at the piano. What differentiates this concert series from any other is the seamless mix of intimate, funny and revealing behind-the-scenes stories from Broadway's biggest stars and their stellar singing of musical theatre repertoire. For tickets and information visit www.ptownarthouse.com or call 800-838-3006.

Lea DeLaria seems to have achieved overnight stardom with her stand-out role as Big Boo in the Netflix hit series Orange is the New Black. And while she went from being able to walk around a city with the occasional "hey it's you" to not being able to walk into a Dollar Store in a suburb without getting asked for a picture, the fact is, Lea has been a professional lesbian for over 30 years. Before that, she freelanced. Lea was the first queer comic to perform on television in America which launched her into world recognition. Prior to her success on "Orange is the New Black," she worked extensively in both Film and Television, in "Awkward," "Californication," "The Oblongs," "One Live to Live," "Law and Order SVU," "Will and Grace," "Friends," "The First Wives Club," "Dear Dumb Diary," "Fat Rose and Squeaky," and "Edge of Seventeen."

Her on and off Broadway credits are numerous, her stand outs include her appearance on Broadway in "On the Town," for which she won Obie and Theatre World awards, as well as a Drama Desk nomination; an Ovation nomination for her performance in "The Boys from Syracuse;" and playing both Eddie and Doctor Scott in the Broadway revival of "The Rocky Horror Show." If that's not enough, Lea has five, records out on the Warner Jazz and Classics label and her book "Lea's Book of Rules for the World" is in its third printing at Bantam Doubleday and Dell. Follow Lea on Twitter and Instagram @realleadelaria and FaceBook.

Seth Rudetsky is the afternoon host on Sirius/XM Satellite Radio's ON BROADWAY as well as the host of SETH SPEAKS on Sirius/XM Stars. As a pianist, Seth has played for more than a dozen Broadway shows including Ragtime, Les Miz and Phantom. He was the Artistic Producer/Music Director for the first five annual Actors Fund Fall Concerts including "Dreamgirls" with Audra McDonald (recorded on Nonesuch Records) and "HAIR" with Jennifer Hudson (recorded on Ghostlight Records, Grammy Nomination). In 2007 he made his Broadway acting debut playing Sheldon (singing "Magic to Do" in a devastating unitard) in "The Ritz" directed by Joe Mantello for The Roundabout Theater. Off-Broadway he wrote and starred in the critically acclaimed "Rhapsody in Seth" (directed by Peter Flynn) at the Actors Playhouse and has also appeared on TV on "Law & Order: CI" and had a recurring role on "All My Children." As an author, he penned the non-fiction Q Guide To Broadway, the novel Broadway Nights and the recently published My Awesome/Awful Popularity Plan (Random House). Broadway Nights is available on Audible.com starring Kristin Chenoweth, Andrea Martin and Jonathan Groff and My Awesome/Awful Popularity Plan stars Jesse Tyler Ferguson, Ana Gasteyer and Megan Hilty. Seth played himself on "Kathy Griffin; My Life on the D-List," was the vocal coach on MTV's "Legally Blonde" reality show and starred opposite Sutton Foster in "They're Playing Our Song" for the Actors Fund. Recently, he co-wrote and starred in the critically acclaimed "Disaster!," a 1970's disaster movie musical which is now slated to transfer to Broadway in 2015. Right now, he tours the country performing with Broadway stars like Patti LuPone, Sutton Foster and Audra McDonald. His newest book, The Rise and Fall of a Theater Geek was published earlier this month by Random House and is available on Amazon.com For more info visit: www.SethTV.com.

About the series
This Broadway @ concert series was inaugurated in 2011 by Producing Artistic Director Mark Cortale @ The Art House in Provincetown featuring Seth Rudetsky as pianist and host. In its fourth season last summer, the series presented Broadway superstars like Kristin Chenoweth, Megan Hilty, Alice Ripley, Cheyenne Jackson and Gavin Creel. The Broadway @ series also premiered in 2013 in New Orleans, in Australia (Sydney & Melbourne) with Megan Mullally and in London's West End with Patti LuPone at the Leicester Square Theater. This season of 2014-15 in addition to Santa Monica, the series travels to New Orleans @ The New Orleans Center for Creative Arts (NOCCA), Fort Lauderdale @ The Parker Playhouse, San Francisco @ The Nourse Theatre, Dallas @ The Dallas Theater Center, San Antonio @ The Woodlawn Theatre, The Poconos @ The Pocono Community Theatre, Detroit @ The Berman Center for the Performing Arts, Provincetown @ The Art House for its fifth consecutive summer… and at a city near you soon! Additional artists who have participated throughout this season include Vanessa Williams, Chita Rivera, Ana Gasteyer, Joanna Gleason and Christine Ebersole. Info at markcortalepresents.com. 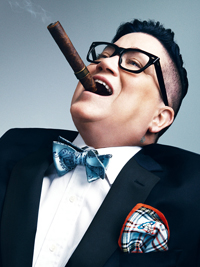