Lead Investigator of Georgia Murder Reveals All in New Book

John Cagle, Lead Investigator of Meredith Emerson Case, Tells His Side of the Story

Alpharetta, GA -- (ReleaseWire) -- 02/27/2020 --More than ten years after the murder of Meredith Emerson, lead investigator John Cagle reveals his take on the case and the lasting impact it has had on his life in his transparent true crime debut, Those Days in January: The Abduction and Murder of Meredith Hope Emerson.

Twenty-four-year-old Meredith Emerson was abducted by sixty-one-year-old Gary Michael Hilton while hiking at Blood Mountain with her dog on New Year's Day in 2008. Hilton held her captive for three days before killing her. He was found not long after, pleaded guilty in trial, and was sent to death row in Florida. The Meredith Emerson case is one that will go down in Georgia history as a gruesome and cautionary tale for all those who enjoy the outdoors.

"Meredith Emerson seemed to be the all-American girl with a wonderful family and group of friends who loved and supported her," says Cagle. "For her life to end this way at the hands of such an evil person was such a tragedy."

In Those Days in January, Cagle takes readers through the investigation from start to finish in a day-by-day account. Readers witness firsthand the struggle to seek justice for Meredith, all while law enforcement does their best to protect her memory from the opportunists, sensationalist reporters, and unscrupulous practices that threatened to deny her the dignity she deserves. Chapter by chapter, Cagle reveals not only the facts of her murder, but the impact on the personal lives of those who worked tirelessly to find Meredith.

Cagle wrote Those Days in January to give those interested in the case a more intimate look into what happened in the investigation than what TV stations could provide. He also hopes it can be therapeutic for himself and others who were close to the case. "For years I have struggled with this case, as some other agents have," says Cagle. "I broke a rule that every investigator must follow. I let this case become personal. I simply got too close to it. I'm hopeful telling this story will help me move on."

Those Days in January is available now on Amazon.com and Shop.BookLogix.com.

Note to Media: John Cagle is available for media interviews. To schedule an interview, please email jathon@windstream.net or call 706-878-0724. 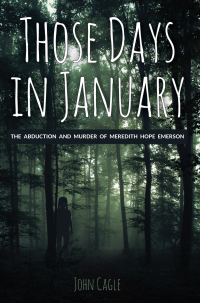