Corte Madera, CA -- (ReleaseWire) -- 12/13/2018 --Jesse Krieger has proven countless times that he his a keen eye for compelling stories. With Lily Barlow: The Mystery of Jane Dough, written by first time author Carla Vergot, it's not any different. Lifestyle Entrepreneurs Press saw in Lily Barlow a doorway leading to a path not usually taken by the publisher, the fiction world, and it hit the mark yet again. Carla Vergot's debut novel is an engaging story with the right amount of mystery, family relationships, fun tidbits, and a lively story arc sustained by its array of fascinating characters that more likely than not, will have the reader immersed in the day to day life of Marshall, VA.

The book tells the story of quirky young lady who is fascinated by fictional bounty hunter, Stephanie Plum, and has always wished for a more freewheeling, adventure-filled lifestyle outside her sleepy hometown of Marshall, VA. When she finally leaves the town behind to attend the University of Virginia, she's soon called back, after her dad suffers a heart attack, to keep the family bakery running. Feeling as though moving back in with her family would be a step backward, she rents an efficiency garage apartment on the edge of town. That's when Lily's propensity to turn everyday occurrences into true crime plots kicks in, and the real fun begins.

Upon settling into her new, temporary home, Lily starts suspecting that her landlady, Miss Delphine Walker, is more than a stubborn, independent, senior spitfire in floral print. To Lily, it's clear Miss Delphine is hiding something. Lily's vivid imagination leads her to believe that the elderly woman may have committed a murder and buried the body somewhere on the property. Meanwhile, Lily has discovered an online clearinghouse for murder victims that the cops are unable to identify, and she believes she recognizes one of the victims. Revisiting one particular case over and over, she is convinced she knows the person. Suddenly, keeping the bakery running is not her only problem (or even her biggest problem).

Lily Barlow comes as the cherry on top of Lifestyle Entrepreneurs Press's diverse, highly educating, and entertaining fall catalog. Jesse Krieger and his team worked closely with Carla Vergot to bring the readers an irresistible piece of literature with great artwork, and an even better story. One of the final titles to come out this year, Lily Barlow is another example of the quality standard Jesse and LE Press work so hard to maintain, and it sets the tone for a very productive 2019, especially now that Jesse teamed up with behemoth distributor Ingram Sparks. Lily Barlow: The Mystery of Jane Dough hit the shelves December 4th, and it's available wherever books are sold. 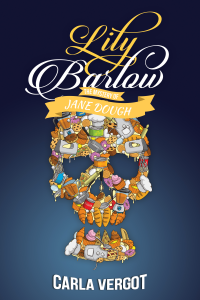