Supplying his fan base with more of the tunes he’s become so popular for local music artist Bret Welty is set to launch his first solo album at High Desert Harley Davidson.

Boise, ID -- (ReleaseWire) -- 08/01/2014 --Heavy on the hometown charm local music artist Bret Welty is set to launch his latest CD entitled, “Unlimited Edition” at a High Desert Harley Davidson event August 23rd. The event will correspond with an opening band, a military vehicle show, and the dedication of one of the album’s songs entitled “I Will Come Back To You”. A homage to wounded war heroes, Welty will donate its proceeds to those who've served in America’s military. His first solo album, the rock EP features nine original songs and three cover tunes that help a listener remember why they love great music.

With this album’s release Welty corners the market on tunes about love lost, hard times, triumph, freedom, and patriotism. Original songs off the Unlimited Edition CD include “Black and Blues”, “Narrow Road”, “Sunny Day” and “No Fakin’ It For You” among others. The album also includes two Bill Withers favorites and one from The Marshal Tucker Band.

A local favorite, giving fans shows flowing with elements of jazz, rock, funk, Latin, R&B, southern rock, and country, Welty doesn’t disappoint. He said of the CD launch party, “Playing music is always has been beyond fun for me and releasing my first solo album is a big thrill. With this new launch it just makes it all that more incredible for me and hopefully, for the crowd as well.”

About Bret Welty
Bret Welty is a singer, songwriter and musician with roots in the blues, southern rock, country and R&B genres. Playing in venues across the Northwest Welty has performed with Daryl Mansfield and Dennis Agajanian among other notable music artists. Welty released the albums “Anthology” and “Unlimited Edition” in 2014. 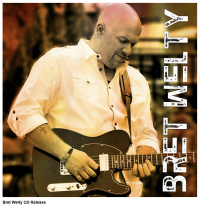