Colorado native, Louis Colaiannia, writes and produces a very moving song in tribute to the victims and families from the Aurora movie theatre shooting 2012. The 2nd year anniversary is July 20.

Denver, CO -- (ReleaseWire) -- 06/10/2014 --World-renowned musician, Louis Colaiannia, is willing to perform “live” his heart-rending tribute in support of victims and families from the Aurora theatre shooting.

“A live performance would bring awareness of the need to continue the support for the victims and their families,” he said.

It would also make people aware of the song so they can support the Colorado Organization for Victims Assistance by purchasing the song.

100% of the funds will go to Colorado Organization for Victims Assistance (COVA).

Since 1982, COVA has been committed to fairness and healing for crime victims, their families and communities through leadership, education, and advocacy. By operating in an inclusive and compassionate manner, COVA creates solutions and positive change.

Colaiannia is also available for supporting any and all productions surrounding the July 20th anniversary. “I'm offering the music to be used as background for any production involving the theater shooting royalty free,” he said.

“I just ask for credit so people can find it and purchase it,” he said.

Radio interviews and playing of the song are also available, he said.

“The trial will be a very hard time for these families,” said Sterling Harris from COVA.

Colaiannia believes that public financial support for the families is diminishing. “I'm afraid this has fallen off most people's radar, so I'm hoping my song can help contribute to the awareness that there is still a need for support,” he said.

* I wrote Aurora during the hours and days following the horrific tragedy in my community; the shooting at the Aurora Theaters on July 20, 2012. Aurora is dedicated to all the victims, families, and first responders who were impacted by the tragedy and all proceeds from this song will be donated to victim’s assistance funds. – LOUIS COLAIANNIA

** The song was produced by Will Ackerman, Grammy award winning guitarist and producer and founder of Windham Hill Records, and Tom Eaton.

About Louis Colaiannia
Colaiannia is a virtuoso of classical piano, accomplished songwriter, arranger and performer.

He holds a Mozart Award for his contributions to music, and his latest release, Closer, continues to show his versatility.

Louis is a Primo Award winner two years in a row (2011 and 2012) for Italian American Entertainer of the Year and was recently inducted into the Colorado Italian American Hall of Fame 2012.

Colaiannia performs nationally and recently signed a contract to tour India. He has performed at the Keystone Jazz Festival, Copper Mountain Jazz Festival, the Festival Italiano and the Woodland Park Jazz Festival.

About COVA
COVA is a nonprofit statewide membership organization, with over 800 members throughout Colorado. COVA's vision is to be recognized as a national leader in building a collaborative environment where crime victims are given the opportunity to heal and restore balance to their lives. More information at: http://www.coloradocrimevictims.org 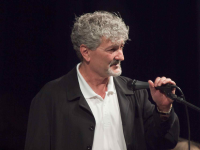