Project Enterprise Phase Two on Kickstarter is a mission to recreate the iconic Starship Enterprise to travel the world for all Star Trek fans spanning generations.

Los Angeles, CA -- (ReleaseWire) -- 08/03/2016 --When Paramount sold off the original model of the Starship Enterprise used during production of Star Trek: The Motion Picture, Star Trek fans across the world lost an icon. In a private collector's hands since 2006, the old Enterprise was improperly handled, resprayed, and mistreated with hodge-podge patch jobs that would break Scotty's heart.

This is a disaster on par with a warp core breach and while the original design crew who launched that first Enterprise on to the big screen are still able, they want to give generations of Trekkers a new icon to rally around. How? By building an entirely new movie-quality USS Enterprise 1701 refit but better. That's because the plan is to make it 50% larger and 200% more beautiful than the original thanks to the latest technology and materials that just didn't exist in the 1970s.

Once out of space dock, this brand new Enterprise will go on tour around the world over and over again and forever to bring joy and satisfaction to Star Trek fans everywhere. This isn't going to be a CGI representation or an intriguing work of digital wizardry but a real and solid and tangible Enterprise by the people who created her in the first place.

Thanks to the personal involvement of Star Trek legend Nichelle Nichols leading and inspiring the original Enterprise design team, with the support of Rod Roddenberry, Star Trek fans can be a part of something that will preserve Star Trek history and share that passion for the Trek universe – regardless of timeline – with something lasting and meaningful.

The perks on offer are nothing short of extraordinary and should be considered every Star Trek fan's dream come true. Rewards include rare collectibles from behind the scenes from Star Trek including Enterprise blueprints, signed show scripts, autographed books, collectible patches and other goodies that will light up the smiles of Trekkies brighter than dilithium crystals. 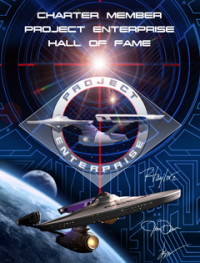