Made for Commuters, by Commuters, Neavio Delivers the World's First ANC Headphones with Built-in Powerbank

New York, NY -- (ReleaseWire) -- 03/20/2019 --Turn off the hustle and bustle of the city and turn up the volume on the world's first ANC headphones with a built-in power bank created by Neavio. As featured on their Kickstarter campaign, Neavio promises to completely transform any traveler's daily commute with a lightweight, over-the-ear headphone, delivering flawless sound, and an added power boost to smartphone batteries.

The team behind Neavio worked diligently, making design choices that seemed to be near impossible to fit into a singular piece. The end result is a contemporary, streamlined headphone design, with incredible sound quality that allows listeners to capture every effect, each crescendo, deep bass, and heart-stopping beats, right in the middle of their daily commute.

Earpieces are covered with soft, cushioned muffs for a comfortable fit that doesn't weigh heavily on the ears. A snug, snag-free top completes the design. However, it's the innovative functionality of the Neavio ANC headphones that preserves, enhances, and completely transforms an already-impeccable level of audio clarity.

This truly is an "all-in-one" solution that aims to please both the quintessential audiophile and the tuned-in commuter. Neavio is patent-ready and unveiling its innovative, top-shelf headphones, along with the power bank, for a lean $199. However, backers of the Kickstarter campaign have much to gain from a show of loyalty, thanks to early-bird pricing.

Neavio headphones come with a 40-hour battery life, keeping users connected to their tunes, either in wireless or wired mode, all week long. It features a hidden but handy LED power indicator to let users know when the device is charging. An unobtrusive USB port allows users to juice up their smartphones using the headphones' built-in power bank. Users can make sure the beat goes on since the Neavio comes with two PCBA boards — one for music and one for the operation of the power bank — allowing users to listen while charging. It's also easy to drown out the rest of the world, thanks to an impeccable noise cancellation feature.

Backers of the project will be happy to learn that their funds will be put to use in the expansion of Neavio headphones into brick-and-mortar operations and retail stores once the campaign has successfully launched. When it launches, Neavio is sure to capture the studio-quality, ANC-headphone marketing handily but it's the gorgeous, smooth quality of playback that will put this contender over the top of the competition. 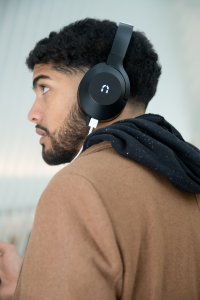