“It’s the Time of the Season...” to Celebrate phati’tude’s Long-Awaited Spring and Summer Issues!

phati’tude Literary Magazine announces the long-awaited publication of its “Summer Sixties Special” and “Spring Has Returned: A Season of Renewal.”

New York, NY -- (ReleaseWire) -- 12/07/2011 --Winter may be here, but phati’tude Literary Magazine is “burning the clock” to celebrate the long-awaited publication of its “Summer Sixties Special” and “Spring Has Returned: A Season of Renewal” issues on Amazon.com.

The “Summer Sixties Special” explores a defining chapter in America’s past—the 1960s—and poets and scholars reflect on its lasting cultural and literary legacies. “Spring Has Returned: A Season of Renewal” embodies Rainer Maria Rilke’s “Spring:” a place and space for creating new ideas in poetry, music and art.

Despite unforeseen delays in production, the editors at phati’tude are overjoyed to present readers with these two long-awaited issues that will never go out-of-style or become dated. Editor-in-chief Gabrielle David explains that both issues are the result of the tireless efforts of, “several dedicated and talented volunteers who operate on a ‘cloud,’ not an office.” There were some considerable setbacks these past few months, but, to quote David, “such is the life of running a literary magazine.” She goes on to say, “Overcoming the challenges we recently faced despite the delay proves our deep commitment in phati’tude Literary Magazine and we are extremely proud to be able to present these important literary works to our readers.”

It’s true, Spring and Summer are long gone, but as people begin to dig in for the cold long winter months ahead, imagine being curled up with a cup of coffee or hot chocolate reading phati’tude Literary Magazine’s long awaited Spring and Summer issues.

As The Zombies sang in their 1968 hit “Time of the Season:” “It’s the time of the season/when love runs high,” phati’tude’s stunning Spring and Summer issues are a product of the love of its dedicated volunteers and the literary voices who have created and shaped them. The “Summer Sixties Special” and “Spring Has Returned” will also make a wonderful gift for lovers of contemporary literature. So get in the spirit of giving... support our literary magazine and offer the gift of literature to others as well as yourself.

Now available for sale on Amazon.com for $18 and other online outlets.

Established in 1997, phati’tude Literary Magazine is an award-winning, internationally-acclaimed quarterly magazine published by the Intercultural Alliance of Artists & Scholars, Inc. (IAAS), a New York-based nonprofit 501(c)(3) organization that provides a forum for diverse literary works from around the globe. 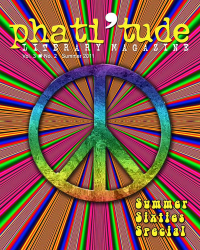 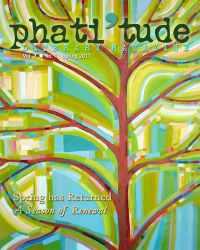