Hong Kong, China -- (ReleaseWire) -- 09/24/2020 --At 2am on September 17, ZB.com ushered in the "darkest moment" in its seven-year history. All the mainstream currencies plunged by more than 99%. BCH with a normal price of more than 215 USDT fell to 1 USDT, and BSV with a price of more than 145 USDT fell to 1.65 USDT. ZB.com's official Twitter account issued an emergency statement, saying that due to the data explosion, the database expansion partition that was scheduled to be upgraded at 2am went wrong, and that would rollback some users' trading data after 2am.ZB.com later issued an official dispatch saying it expected to return to normal at 5 p.m.

The announcement calmed some users down, but at 17:00 on the same day, they found that they could not log on to the platform. The voice of questioning became more and more noisy and rumors spread everywhere.Some people think ZB.com is playing time wasting tactics, ready to run away with the money.Some people think it is the hacker to steal money, the platform cannot fill the capital loophole;Some people think when upgrade problems happen, the first found users take advantage of the platform digital currency price collapse and the platform lost hundreds of millions of funds, the platform is worried about how to explain to users.

ZB.com did not open its platform even when it's late in the evening, and there was widespread panic among users.Under the pressure of public opinion, ZB.com CEO Omar got online for a live-streamed broadcasting, explaining why it had been shut down for so long and giving an estimated time when it would be open to login and open the asset page from 10 to 11am the next day.

Users paused for a moment to hear CEO Omar's optimistic forecast, but unfortunately, ZB.com didn't launch as scheduled after 11:00am the next day.At this point, the negative feelings of users can no longer be suppressed, and many users (which may include the guidance of the water army) even want to block the ZB.com office, and some have already called the police.CEO Omar went to ZB.com's official Weibo fan group at noon to again channel users' emotions, and again to give the estimated time -- between 6 p.m. and 9 p.m.

At 9 p.m., just when users think ZB.com has broken its promise again, ZB.com announces that the platform login function is open and some users can view the asset status.Later, Omar, who looked tired, appeared in the live broadcast. The user truly believed that the platform was actually repairing the system, and it was not a so-called run away.

Omar was so exhausted that he fell asleep more than two hours after the broadcast and snored in the video.According to data from a live streaming service, its popularity reached 950,000 and it once ranked 36th.For the first time, digital money has made it to the top of the list on popular social software in unusual way.

At 16:55 on September 19, ZB.com made an official announcement, announcing that trading would resume at 20:00 PM.

So far, with the mood of users stabilizing and rumors fading away, ZB.com has won a good battle with its strength.

ZB.com has always been a low-key image, rarely marketing hype. It often highlight the sign of "7 years without any safety accidents", a bit like a naive big brother image.During the blackout, many unscrupulous media outlets spread black copies of ZB.com, amplifying user panic.But ZB.com has not been beaten down, and these so-called medias have also been beaten face by the facts, and the rumors have been dispelled.

After the crisis of trust, ZB.com becomes completely "popular", the big brother also had to walk out of the front stage, show its strength, but also more gain the trust of users.After seven years of experience, ZB.com has also come to realise that it is not always in the comfort zone, but must prepare for the future so that it can outperform other mainstream exchanges. 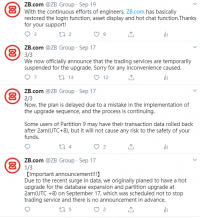 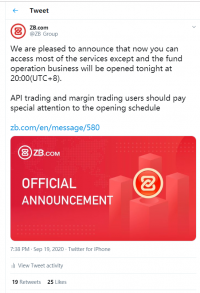