“Make HERstory" is a revealing, vulnerable tale of truths, written and performed by Brock. In this one-woman show, Margret journeys into her childhood in order to gain a better understanding of a past she often tries to avoid. A Work in Progress Theatre Company presents “Make HERstory" at LaMama Theater on August 29th and 30th.

New York, NY -- (ReleaseWire) -- 07/25/2014 --On August 29th and 30th , nine years after being ripped from her home and displaced by Hurricane Katrina, Brock finally steps foot on a New York City stage to tell “HERstory.” This ground breaking and incredibly entertaining solo play has been used as a creative healing tool for various organizations throughout the east coast.  (BCS in Brooklyn, NY, Stop the Silence in Washington, DC, and The Family Tree in Baltimore, MD etc.) . Ten percent of the proceeds will support The Transitional Living Community's art therapy program in Brooklyn, New York.

“Make HERstory,” The dynamic one woman show written and performed by acclaimed actor Brock and accompanied by the djembe player Menes Yahudah, will grace the stage at The LaMama Theatre 74 E. 4th Street, New York, NY 10003 on August 29th at 7:30pm and August 30th at 2pm and 7:30pm.

“HERstory” It is the tale of Margret, a twenty-nine year old African American out of work actress and writer who is juggling pounding the pavements of New York City to become a working actress with the personal journey of self-acceptance and self-love. It is also the story of her younger self Maggie, a courageous, highly sensitive, and optimistic seven year old self-made artist growing up in the twelfth ward of New Orleans, La. As she uses her imagination to survive the abandonment and abuse in her household Margret/Maggie tag team telling us, “HERstory.” In this public conversation with her subconscious mind, she examines the perpetuating abuse that resides in her family lineage and explores the possibility of forgiveness while she fights for the survival of her childhood optimism. It is reality's laughter, a GUMBO of true stories that never had the chance to be told - until now.

About the Actor & Playwright Brock
“Between the ages of four and fifteen I fought in my home more than a feather weight boxer in his prime. My household was not a safe place. And through the many adversities I encountered growing up, my coloring books and crayons were my most loyal companions. Art, unintentionally, proved to be a comfort to me throughout the trauma I experienced. I have always loved art, in all its forms. But the moment someone put a play in my angry teenage hands was the moment they saved my life.”

New Orleans born and raised actor, playwright, and motivational speaker Brock has been gracing the east coast with her presence sense late 2005. Her stage credits include, "The Face of Emmett Till", "Shaking the Mess Out of Misery", "The Dance on Widows Row", " Gone/ In the Middle" and "The Trial of One Shortsighted Black Woman vs. Mammy Louise and Safreeta Mae." Brock has done work on season five of the HBO series "The Wire", the film "Jamesy Boy" and Center Stage's Production of "An Enemy of the People". 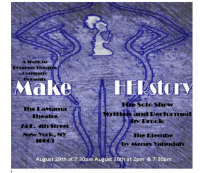