The mission of the Iron Sharpens Iron Conference Network is to mobilize regional ministries to resource local churches with a first class one-day equipping conference that is specifically designed for men (age 13 and older). Originally, in 2001 the New England Men's Ministries was only offering conferences in the New England area, until the demand led them nationwide in 2003. Since then, The Iron Sharpens Iron Network (the New England Men’s Ministries and independent local church across the country) has been holding local one-day conferences for men looking to enrich their lives in Christ. This year, the conferences will be held in over 50 different cities.

The conference is based on a verse found in Proverbs 27:17 "As Iron sharpens Iron, so one man sharpens another." As men following God, it's not only important to live the godly life, it's also important to equip other brothers in Christ through discipleship, ministry, counseling, prayer and whatever else helps each other live better lives for God.

The Iron Sharpen Iron conferences have main sessions with worship and national speakers as well as a variety of equipping seminars designed specifically for men. And among the speakers at the March 24th 2012 conference in Springfield, Illinois is Jody Burkeen of Burkeen Ministries. Jody Burkeen is a nationally recognized and respected author of MAN UP! God’s Way with a passion to help men be godly men in this ungodly world.

"MAN UP! Gods Way is dedicated to changing the way Christian men live and act. We want to change Christian men from being complacent, lazy and disobedient to God’s word. With Jesus Christ as our example, we will strive to teach men to be more Christ-like every day" says Jody Burkeen.

Jody Burkeen's goal is to equip men to be stronger men of God, and not to live like "spiritual sissies". In his book, MAN UP! God’s Way, he teaches you how to "Man Up" personally, with family, in marriage, in your church, at work, in discipleship and more.

"This ministry was birthed out of a desire to change the way Christian men "do" Christianity" says Jody Burkeen.

If there’s anyone that can help men have a better outlook on how a man should live for God in today’s sinful society, Jody Can.

If you are a man looking to improve your walk with God, the Iron Sharpen Iron conference is just for you. Go to http://www.ironsharpensiron.net to find the closest conference in your area. If you are in Illinois or a nearby state, you have a great opportunity to hear Jody Burkeen and other speakers from across the country speak. Other speakers include David Perkins of New Life Church in Colorado and Voddie Baucham of Preaching Grace Family Baptist Church in Texas. This is an opportunity you don’t want to miss. Sign up today and start enhancing your life with Jesus immediately! 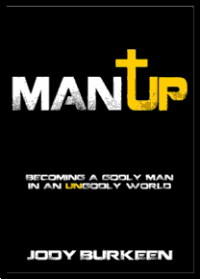