John E. Holloway and Indigo River Publishing Team up to Publish War Novel on Combat Operations in Grenada and Beirut in the Early 1980s

A veteran of the Marine's, Holloway grew up in Williamsburg, Virginia and graduated from the Virginia Military Institute in 1981. Following graduation, Holloway was commissioned as a Second Lieutenant in the United States Marine Corps. He deployed with Second Battalion, Eight Marines, from 1983-1984 during which times he participated in combat operations in Grenada and Beirut. After leaving the Marines Holloway attended George Mason University School of Law and held the position as editor-in-chief of the law review. Since his graduation he has practiced maritime law in Virginia and written about his wartime adventures. Since 1981 Holloway has published an illustrated journal and has been published in The Sewanee Review and the Tulane Maritime Law Journal.

"I wanted to tell the story of historical events that are now often forgotten – the invasion of Grenada and operations in Beirut" said Holloway, author of Apricots. "It was a pivotal time. Ronald Regan was in the middle of his first term. Terrorists had destroyed the U.S. Embassy in Lebanon and a Marine headquarters at the airport just south of Beirut."

Holloway tells his story in a way that takes the reader from their home and out on the ship with Second Battalion, Eighth Marines, and then ashore for operations in Grenada and then on to Beirut. This novel tells the story of Marines in combat in a way that is anything but superficial – readers will learn about the comradery, humor, and sacrifice of the men on the ground thousands of miles from home. While the story is fictional, it is framed by real events including true accounts of the terrorist attack on the marine headquarters in Beirut and the coup in Grenada that triggered the invasion.

"I have a story that the world deserves to hear" said Holloway. "Almost 40 years after war has ended, we need to not forget what happened."

Apricots can be purchased at Indigo River Publishing, Amazon, or any of your favorite online bookstores. 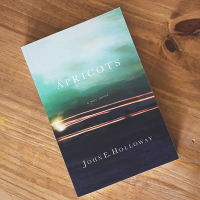