Mashup Manga-Illustrated Satire of ROMEO and JULIET Launched on Amazon

500 years into the future, the Prince of Verona is a robot and even Karate Jesus makes an appearance

Dallas, TX -- (ReleaseWire) -- 07/10/2019 --Readers are qualifying it as "amusing", "irreverent" and even "outrageous" and the author, Aretino Wild, says that "this is the mashup version of ROMEO AND JULIET that typically petulant Shakespeare scholars will show disdain, but only after secretly having some good laughs after reading it."

ROMEO AND JULIET: A SATIRE has been launched this week on Amazon, offering visually appealing Manga-style illustrations for a Romeo and Juliet story that resembles the style of SOUTH PARK and which takes place 500 years into the future.

Presenting the Prince of Verona as a robot that was once programmed by humans, where the Montagues and Capulets engage in laser swordfights that refer to their phallic meaning, and where even a Karate Jesus character has a role, this is not the typical narrative that readers of Shakespeare's classic work would expect.

"Basically, I grew tired of people feeling intimidated by Shakespeare scholars and school teachers who take ROMEO AND JULIET even more serious than Shakespeare himself would expect us to. I believe that this classic was a satire intended as such by Shakespeare himself, and, feeling inspired by the SOUTH PARK genre that I enjoy so much, I felt that I should give the story that kind of twist," Mr. Wilde stated.

The book is intended both as a lighter version of the story that students are required to study but which they may better understand through Wilde's daring approach, and it is also expected to amuse even hardcore Shakespeare fans. "Having a good laugh while revisiting the non-sense of certain conducts of the past seen from the perspective of our current days, where nonsense is an ever-growing ingredient of modern society, is certainly healthy," Aretino Wilde further commented while alluding to how he expects his book "to do for Shakespeare what PRIDE, PREJUDICE, AND ZOMBIES did for Jane Austen."

ROMEO AND JULIET: A SATIRE is available in Kindle and paperback, and the positive reviews on Amazon and GoodReads have started to be posted right after the book was launched.

Readers can order it from Amazon, at https://www.amazon.com/dp/B07SL5KSBS, and Mr. Wilde expects this to be only the first of a series of classic works that he intends to revisit and revamp with a comedy twist. 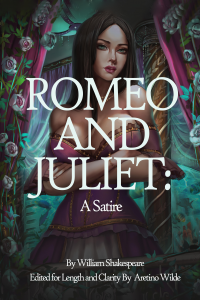