Provincetown, MA -- (ReleaseWire) -- 05/19/2015 --Mark Cortale, Producing Artistic Director of The Art House in Provincetown, MA is thrilled to announce that Matthew Broderick and Sarah Jessica Parker will join his inaugural Broadway @ Town Hall series featuring SiriusXM radio's Seth Rudetsky as pianist and host for one night only on August 17th. Matthew Broderick is a two-time Tony Award winner for Neil Simon's "Brighton Beach Memoirs" and for "How to Succeed in Business Without Really Trying." Sarah Jessica Parker won four Golden Globe Awards, three SAG Awards and two Emmy Awards as Carrie Bradshaw on the long-running HBO series "Sex and the City". She reprised her role and served as a producer of the two screen adaptations of the hit series. Broderick and Parker have not appeared together on stage for nearly two decades since the Broadway revival of "How To Succeed…" They will make their Provincetown debut with Rudetsky for two performances to include great songs and hilarious conversation on the Monday of Carnival Week, August 17th at 6:00 PM and 8:30 PM. For Tickets visit www.ptownarthouse.com or call 800-838-3006.

Matthew Broderick and Sarah Jessica Parker join a who's who list of artists appearing this summer in the Broadway @ Town Hall series hosted by Seth Rudetsky in Provincetown. Leading off is comedian-actress Rosie O'Donnell, featuring Rudetsky as pianist and host, for one show only on Sunday, May 24 at 9:00 PM. Tony and Emmy Award winning star Neil Patrick Harris and David Burtka, featuring Rudetsky as pianist/host, will perform two shows only August 10 at 6:00 PM and 8:30 PM. History-making six time Tony winner Audra McDonald will perform with special guest Will Swenson, also accompanied by Rudetsky, for one show only on August 24 at 6:30 PM. McDonald will perform in Provincetown on the heels of a Tanglewood engagement in July as well as a Williamstown run in Eugene O'Neill's "A Moon For The Misbegotten" with Will Swenson. Last but not least Tony-winner and star of "30 Rock," "Unbreakable Kimmy Schmidt" and "Ally McBeal" Jane Krakowski also joins Rudetsky for one show only on August 30 at 6:30 PM.

The original, groundbreaking Broadway @ The Art House series returns to its annual summer home for its fifth season with another stellar lineup of Broadway's brightest stars, each featuring the series' long-time host and SiriusXM radio star Seth Rudetsky at piano, except where otherwise noted. Two Time Tony Nominee and star of Broadway's "Cinderella" Laura Osnes makes her series debut on June 27 and 28 at 7:00 PM. Two-Time Tony-Winner and star of TV Land's new hit series "Younger," Sutton Foster returns to the series on July 3 at 7:00 PM and July 5th at 5:00 PM and 7:00 PM (the star will also be premiering her new art show at A gallery in P-town this summer). Star of Broadway, Stand-up Comedy, and TV's "Orange is the New Black" Lea DeLaria performs July 11 and 12 at 7:00 PM. TV's original Star Search winner and Tony-nominated Broadway star Sam Harris returns to the series on July 24 and 25 at 7:00 PM. Cabaret star Roslyn Kind (kid sister of Barbra Streisand) performs with Alex Rybeck at piano and directed by Richard Jay-Alexander on July 31 and Aug 1 at 7:00 PM. Norm Lewis, Tony-nominee for "Porgy and Bess" and star of Broadway's "Phantom of the Opera," will perform August 7 and 8 at 7:00 PM. Kerry Butler, Tony nominated star of "Xanadu" and "Rock of Ages" performs August 14 and 15 at 7:00 PM. Broadway & cabaret performer and SiriusXM radio personality Christine Pedi performs August 22 at 8:30 PM for one show only. Cabaret legend and P-town favorite Marilyn Maye returns for her fifth season with Billy Stritch at the piano, on August 25 - 29 at 7:00 PM. Broadway stars Alice Ripley & Emily Skinner who created the roles of Daisy & Violet Hilton in the original production of "Side Show" join forces with Rudetsky on September 1 and 2 at 7:00 PM.

The Art House is also now offering a special Broadway Season Pass to audiences for an overall savings of $315 for audiences wishing to purchase tickets for the entire combined Broadway @ The Art House & Broadway @ Town Hall concert series. The Broadway Season Pass allows purchasers to choose & reserve seats in the theaters' VIP Sections, and to transfer tickets to friends in cases where the ticket purchaser can't attend. For more information, please visit www.ptownarthouse.com or call 800-838-3006.

As if the aforementioned lineup were not impressive enough, The Art House is nothing if not true to its roots and the cultural heritage of its locale. The venue under Cortale's leadership has gained an international reputation for hosting cutting edge comedy and music talent. Memorial Day weekend will kick-off with the one-two punch of Indie Rock star Melissa Ferrick back for her fifth consecutive season with two shows on May 23 at 6:30 PM and 9:00 PM, and the hysterical brand new drag comedy "Designing Women Meets The Golden Gals" starring Varla Jean Merman, Ryan Landry, Olive Another, and Liza Lott will open for a summer-long run on May 23 at 7:30 PM and run through September 5. Varla Jean will also debut her brand new solo show "Varla Jean's Big Black Hole" from June 28 through September 7, with Gerald Goode at the piano. Next up, Well-Strung, the singing string quartet return for a fourth consecutive summer to debut their all new show "Summer Lovin'" directed by Richard Jay-Alexander from June 30 through September 2.

RuPaul's Drag Race stars will invade the town all summer long: Drag Race winner Bianca Del Rio will debut her "Rolodex of Hate" for P-town audiences from August 10 through September 3; Drag Race winner Jinkx Monsoon returns with cohort Major Scales in the all-new show "Jinkx Monsoon's The Inevitable Concert" to run from July 15 through September 18; Drag Race star Courtney Act will present "Boys Like Me" from June 30 to August 20; and Jinkx Monsoon and Peaches Christ will bring their "Return to Grey Gardens" to the venue from August 21 to September 20.

About The Art House and The Broadway series
The Art House is Provincetown's premier entertainment venue and Cape Cod's summer home to top Broadway talent, internationally touring cabaret artists and stand-up comics. The Art House, under the leadership of Producing Artistic Director Mark Cortale, is the original home to the internationally acclaimed Broadway @ The Art House series hosted by Seth Rudetsky. In its fourth season last summer, the series presented Broadway superstars like Kristin Chenoweth, Megan Hilty, Alice Ripley, Cheyenne Jackson and Gavin Creel. The Broadway @ series also premiered in 2013 in New Orleans, in Australia (Sydney & Melbourne) with Megan Mullally and in London's West End with Patti LuPone at the Leicester Square Theater. This season of 2014-15 in addition to Santa Monica, the series travels to New Orleans @ The New Orleans Center for Creative Arts (NOCCA), Fort Lauderdale @ The Parker Playhouse, San Francisco @ The Nourse Theatre, Dallas @ The Dallas Theater Center, San Antonio @ The Woodlawn Theatre, The Poconos @ The Pocono Community Theatre, Detroit @ The Berman Center for the Performing Arts, Provincetown @ The Art House for its fifth consecutive summer… and at a city near you soon! Additional artists who have participated throughout this season include Vanessa Williams, Chita Rivera, Ana Gasteyer, Joanna Gleason and Christine Ebersole. More info at markcortalepresents.com.

Seth Rudetsky is the afternoon host on Sirius/XM Satellite Radio's ON BROADWAY as well as the host of SETH SPEAKS on Sirius/XM Stars. As a pianist, Seth has played for more than a dozen Broadway shows including Ragtime, Les Miz and Phantom. He was the Artistic Producer/Music Director for the first five annual Actors Fund Fall Concerts including "Dreamgirls" with Audra McDonald (recorded on Nonesuch Records) and "HAIR" with Jennifer Hudson (recorded on Ghostlight Records, Grammy Nomination). Recently, he co-wrote and starred in the critically acclaimed "Disaster!," a 1970's disaster movie musical which is now slated to transfer to Broadway in 2015. Right now, he tours the country performing with Broadway stars like Patti LuPone, Sutton Foster and Audra McDonald. His newest book, Seth's Broadway Diary, was ranked as a number one bestseller on Amazon.com For more info: www.SethTV.com. 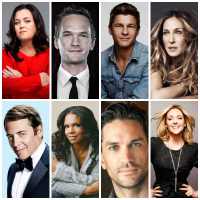 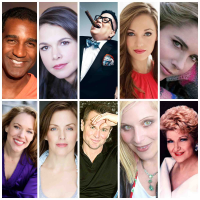 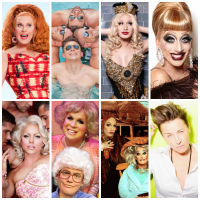