Chicago, IL -- (ReleaseWire) -- 07/29/2016 --Maximum Fantasy Sports is breathing additional life into the fantasy football industry by providing unique games for their customers to play. In an industry dominated by DraftKings and FanDuel and their salary cap games, Maximum Fantasy Sports is separating itself by offering games utilizing an Online Draft and configuration options that no one site offers. "Fantasy Football has always been more enjoyable when a live draft is a part of team-building.", states Bill Parsons, President of Maximum Fantasy Sports.

For those players interested in playing in public fantasy football leagues for fun or for a cash prize, MFS offers enough games that you will find yourself trying out a few different game types to spice up your NFL viewing. "Salary Cap games in fantasy football have been around for decades, but the majority of players enjoy the thrill of a Live Draft, which is not a part of a Salary Cap game. All of our games have a draft component to it for extra enjoyment and to help level the playing field. Drafting takes the fear of swimming with fantasy sharks out of the game.", explained Parsons.

The fantasy football games offered at MFS are listed below and come in a variety of entry fees/payouts with drafts scheduled throughout July, August and September. Payout amounts differ with the entry fees but are always 90% of the total pot collected. Playoffs begin in week 14 and also feature a Toilet Bowl for all Head-to-Head leagues. You can find a full description of each public fantasy football league on the site for the following league types.

- Traditional 2-Week leagues – this league is identical to the Traditional Flex Live Draft league except that 4 teams make the playoffs and each matchup runs for 2 weeks each with the highest combined points winning.

- PPR leagues – this league resembles the Traditional Flex league but the scoring system awards a point per reception and rushing and receiving TDs drop to 4 points each with bonuses awarded (extra 1 or 2 points) for longer TDs.

- TD Only leagues – this league is a big departure from Traditional fantasy leagues and harken back to the days of scoring on paper when the Commissioner made life easy on himself and only needed to score points for Touchdowns. TD points vary with the distant of the touchdown.

- League Average leagues – this league resembles the Traditional Flex league but the twist in this league is that you will receive 2 Win/Loss decisions per week; one versus your H2H opponent and one versus the League Average (the average score of all starting lineups in the league for that week). This league type awards higher-scoring teams more than standard H2H.

- Bye Week Rollover leagues – this league resembles the Traditional Flex Live Draft league but the twist in this league is that you will be able to choose players the week before they are on Bye and their game has started and determine if you want their points for that week to also carry-over to their Bye week, thus locking in two weeks (good or bad).

- In-game change leagues - this league resembles the Traditional Flex league but the twist in this league is you will be able to change players at the quarter or half, depending on which league you join. This helps if you have a player that gets hurt or is underperforming in his game. Of course, each period is locked once we receive the first play in that period and you will only be able to replace open periods with another player's open periods.

- Total Point leagues – this league resembles the Traditional Flex Live Draft league but the twist in this league is that the standings are based off of the total points accumulated over the course of the season by your starting lineup. This league truly awards the highest scoring team.

If you prefer a Live Online Fantasy Football Draft, there are many Public leagues available to augment your own Private leagues and free Survivor, Confidence, Pick em and Squares Pools at Maximum Fantasy Sports along with a nice deposit bonus and high payout rate. 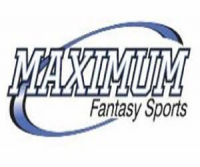 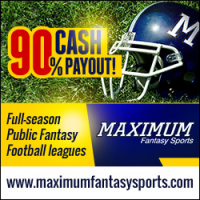