What is an Iconic Restaurant? Everyone will have a favorite in this new book about Ann Arbor

West Bloomfield, MI -- (ReleaseWire) -- 01/05/2017 --From Pizza Bob's to Krazy Jim's and Zingerman's, Ann Arbor has some of the most iconic restaurants in Michigan. Many remember Drake's (tart limeades), Del Rio (the Detburger), and Bicycle Jim's (fried mushrooms), and birthdays at Bimbo's, the city's residents have definite ideas about which eatery serves the best. Come along on a delicious journey into the city's favorite dining spots, some of which have been around for many years. Kickoff to Ann Arbor Restaurant Week

Gail Offen and Jon Milan will be signing their book, "Iconic Restaurants of Ann Arbor"

"Iconic Restaurants of Ann Arbor ," is the newest addition to Arcadia Publishing. Written by local authors Jon Milan and Gail Offen, with an introduction by co-founder of Zingerman's, Ari Weinzweig, (nationally known for his 10 businesses with more than 750 employees and $55 million in annual revenue), the book features more than 150 color images and explores the history of restaurants in the Michigan city.

What is an iconic Ann Arbor restaurant? Ask anyone who has ever spent time there as a student, traveler, or "townie," and they are likely to name several favorites in an instant. The line out the door for raisin toast at Angelo's, Washtenaw Dairy's milkshakes, and the Gandy Dancer's still a favorite for a special occasion. Other favorites included: The Afternoon Delight, the Cottage Inn, and Real Seafood, in Ann Arbor. People are known to have strong feelings about the best places for pizza, coffee, beer, burgers, noodles, and burritos. Although many of the go-to hangouts are long gone, a surprising number still thrive. And there are always a few newcomers coming along to win the hearts of the next generation of diners, nibblers, and noshers. Some are fine restaurants, and others are diners, taverns or carry-outs - but they all are unique and truly iconic local eateries.

The Fleetwood is still there serving hippie hash (hash browns covered in vegetables and topped with feta). The Fleetwood began as the Dag-wood Diner and was constructed by Donald Reid in 1949. The Pretzel Bell is a local rite of passage - countless students spend their 21st birthday drinking and ringing the bell.

For such a free-form joint, Krazy Jim's Blimpy Burger has a particular set of rules for ordering. You could always tell a rookie. The rules involved when to order patties, fryer food, and condiments, among others. That is all part of the charm.

One of the oldest college sports rivalries led to a traveling trophy. And that led to a restaurant, the Jug. The Brown Jug has been on South University Avenue since 1936. University of Michigan memorabilia lines the walls, to the delight of students, alumni, and fans.

The book highlights campus staples that are still around after many years, including Pizza Bobs and Seva. Ann Arbor's restaurant and bar history is tied into one of the most unusual series of laws related to the campus district and prohibition.

This foodie book is complete with photos and excerpts lots of memories and will for sure make you hungry. Though the storefront or location may now differ, the meals taste like memories.

"Iconic Restaurants of Ann Arbor," $22.95, is available at http://www.arcadiapublishing.com, http://www.amazon.com and http://www.barnesandnoble.com

Gail Offen and Jon Milan will be signing there book, "Iconic Restaurants of Ann Arbor"

About Gail Offen
Gail Offen is the author of Grand River Avenue: From Detroit to Lake Michigan, a 2014 book from Arcadia Publishing that she wrote with co-author Jon Milan. A graduate of the University of Michigan, she is a SVP, Creative Director at Doner Advertising and has won awards, including a One Show, Effie and more, plus blue ribbons for baking at the Michigan State Fair. Gail is also an adjunct professor of advertising at Lawrence Technical University. She's always curious to see, eat, and write about what's around every corner.

Jon Milan is a Detroit-based journalist, pianist, composer and historian with three previous Arcadia publications: 2014's Grand River Avenue: From Detroit to Lake Michigan, co- authored with Gail Offen; 2011's Old Chicago Road, and 2009's Detroit: Ragtime and the Jazz Age. Jon has written for The Detroit Metro Times and The Detroit Area Convention and Visitor's Bureau Magazine. He has spent his professional career as a corporate communications manager and gives presentations on the history of Ragtime and early jazz music. 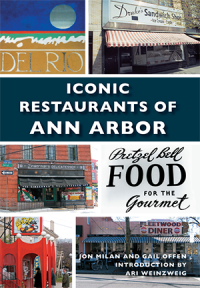