ZilberHaar’s German-engineered, pearwood and real boar bristle, beard brush is set to change the way men care for their beards, moustaches and skin.

Paris, France -- (ReleaseWire) -- 10/25/2016 --To kick off the month of Movember, ZilberHaar announced today that, for a limited time only, its most popular beard brush to date will be available on Amazon.com for just $13.99 (RRP $29.99). The backstory behind ZilberHaar, the company behind some of the best beard brushes available on the market, has led to the development of a range of beard brushes that are crafted from the highest quality materials, using traditional German brush-making techniques – the body of each beard brush is carved from solid pearwood, sourced from the Black Forest, while the bristles are 100% boar bristle.

When asked how she came up with the idea for ZilberHaar's boar bristle beard brushes, CEO, Anica Kath, stated, "Well, the idea came from a good place – me wanting to kiss my husband! The problem was that his beard was so rough that I'd end up with burns! So we started experimenting with beard brushes and we discovered that boar bristles had an instantly smoothing effect on his beard. From that point, I decided that I wanted to create the best beard brush possible for him and ZilberHaar was born. My husband now uses his ZilberHaar brush every day and loves the feeling of his beard, skin and all the kisses he gets from me and the kids!"

With over 40% of men claiming that they get food stuck in their beards (according to a Braun study), a man's beard brush is an essential grooming tool that helps to keep him kissable by ensuring his beard is smooth and food remnant free. ZilberHaar's beard brushes will keep both long and short beards clean and well groomed. The firm boar bristles bring two-fold benefits to the user: the bristles can detangle even the longest beards, keeping the hair manageable and soft-to-the-touch; and, the natural, uneven bristles massage and exfoliate the skin, helping to prevent ingrowing hairs and itchiness.

Anica Kath went on to comment, "We wanted to design a beard brush that men AND their beards would love, and we've done exactly what we set out to do! Our flagship Beard Brush is firm enough to tackle the worst tangles, but soft enough to gently exfoliate the skin, leaving our customers with great looking, comfortable beards that they want to brush. We've received some amazing feedback from men who've tried the ZilberHaar brush on their beards, including one who said that he never imagined that a brush could take his beard from 'epic to ultra-epic'. With more men than ever expected to up their grooming routine in 2016 – 52% according to Braun's statistics – our premium quality beard brush should be part of every man's beard grooming tool-kit."

ZilberHaar's beard brush can be used with or without beard oil to care for and style any beard into shape, as It works by separating the hairs, evenly distributing natural oils from the skin or beard oil along the strands of hair as the man brushes.

Make this a special Movember with ZilberHaar

With Movember coming up, ZilberHaar's beard brush makes the perfect gift for anyone taking part, as the brush works equally well on beards and moustaches. The Movember movement has been helping men fight prostate cancer, testicular cancer, mental health and suicide.

For a limited time only, ZilberHaar is offering a special discount on its beard brushes on Amazon.com. ZilberHaar brushes also come with 30-day money-back and lifetime replacement guarantees. Visit the ZilberHaar Amazon Store. 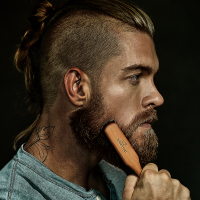