Rochester, NH -- (ReleaseWire) -- 11/03/2017 --The Robbie Mills Memorial Golf Tournament, which was held Wednesday, September 20 at the Lochmere Country Club in Tilton, NH, raised over $30,000 in support of youth-serving groups in the region.

The event, now in its 19th year, is hosted annually by the MetroCast Foundation and honors the memory of Robbie Mills, a 14-year-old Laconia boy who was killed in 1998 for his trail bike by two older teens. Mills' mother, Wendy Mills, is a 32-year MetroCast employee.

Proceeds from the event will support the following organizations in the region:

In addition, over 30 businesses donated prizes which were raffled off at the tournament.

"We extend our sincere thanks to our sponsors, donors, tournament players, and the MetroCast and Lochmere employees whose generous support and hard work made the event such a success," said Edward Merrill, Regional General Manager for MetroCast. 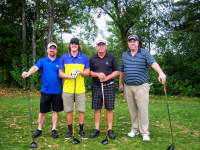