Smart Crowdfunding is slated to carry out strategic marketing initiatives for the ‘Microalgae’ project on Indiegogo. This campaign is crowdfunding to build a microalgae reactor plant that will change the world and promises clean energy, clean air, sustainable products and a healthier way of life.

Freystadt, Germany -- (ReleaseWire) -- 11/19/2014 --Palru, a German company focused on life-changing innovations, has launched a crowdfunding campaign on Indiegogo in order to raise funds for their newest creation. This campaign has a funding goal of $100,000, which needs to be raised by December 26th in order to make the Palru Microalgae Reactor a reality. The brilliant minds behind this project state: “We all live together; we have only one earth. But although our planet is unique, we treat it like something we can buy at any shop. We are destroying our forests, overfishing our oceans, polluting our air, and exploiting our natural resources.” Palru wants to conquer many of these problems. Their Microalgae concept has far reaching ecological potential, and the benefits to humanity are boundless.

The biggest dilemma humanity faces is that we are aware of the problems with our planet, but we also like all of the luxuries and conveniences we have grown accustomed to. This thought inspired Palru to come up with a tangible solution that could overcome many of these problems, without changing our way of life. “Our technology, especially its technical and economical process, represents a unique possibility for our resource-hungry and consumer-oriented civilization to ensure survival in the future and to maintain the status quo of living standards.” Microalgae are essentially microscopic algae that grow in either marine or freshwater systems. They are the primary producers in the oceans that convert water and carbon dioxide to biomass and oxygen in the presence of sunlight. This means they are very beneficial to cleaning up the atmosphere, and providing clean fresh air. However, the benefits of the Palru Microalgae Reactor are far more than just an air purification system. The microalgae are very fast growing, which makes them useful as a renewable energy source, producing affordable and sustainable fuel, ethically and economically produced foods, natural medications and supplements, furniture, cosmetics, plastics, and much more. Microalgae are safer and cleaner than conventional products in use today.

With all of the essential planning and groundwork for the Palru Microalgae Reactor completed, the team is ready to initiate the next steps in creation which is why they are reaching out to the public via their crowdfunding campaign. All of the money raised with this campaign will go toward building the bioreactor and everything needed to make this concept a reality. As an added incentive with their campaign, the team is running a referral contest in which their supporters can win different rewards depending on the amount of the referrals they bring to the page. They are also offering several perks which range in value from a “thank you” perk which allows a supporter to follow the campaign, to various merchandise items and a global thank you on their homepage.

About Palru
Palru was founded by CEO Patrick Rudek, who specializes in economics. After graduation he worked at his parents‘ family business in the gastronomy field and then began working at E.M. Bayer GmbH & Co. KG in Freystadt, a plastics manufacturer. In 2012 he founded Palru, and together with inventor Horst Kurzweil, plans to change the world with their Microalgae Reactor. Mr. Horst Kurzweil has devoted himself to renewable raw materials for more than 14 years.

To learn more about the Microalgae crowdfunding project Click Here

To contact via email write to Patrick Rudek at: patrickrudek@palru.com 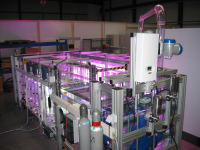 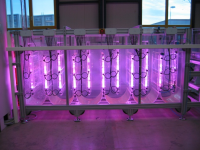