Possibly the Oldest Example of a Most Valuable Player Trophy

Myrtle Beach, SC -- (ReleaseWire) -- 07/20/2016 --MINT State is proud to present the "Holy Grail" of sports collectibles, a unique piece of memorabilia that was uncovered earlier this year and recently consigned to us. Entirely new to the hobby, it is a silver pitcher and arguably the first Most Valuable Player (MVP) trophy ever awarded to a major league baseball player.

In 1900, Philadelphia Phillies outfielder and future Hall of Famer Ed Delahanty was presented with a silver pitcher by a local saloon keeper named William E. Grady. Commemorating his previous season leading the team in home runs with nine, not unusual for the 19th century when home runs were far rarer than in today's game, the trophy's engraving reads "Presented by Wm. E. Grady to Ed Delahanty 1900." Grady, "one of the Phillies' most loyal partisans" according to the Pittsburgh Press, presented a silver pitcher each year to the player "making the most home runs on the grounds at Broad and Huntingdon Streets." This was the location of the Baker Bowl, the home park of the Philadelphia Phillies baseball team.

Known as the "King of Swat" long before Babe Ruth was dubbed the "Sultan of Swat," Delahanty had his best overall season in 1899. He won his first batting title with a .410 average – his third season batting .400 – and led the National League in eight categories, including hits (238), runs batted in (137), doubles (55), and total bases (338). If the Most Valuable Player Award existed at the turn of the century, Ed Delahanty would have been the recipient with the silver pitcher as a suitable trophy.

The Curious Case of Ed Delahanty

"When you pitch to Delahanty, you just want to shut your eyes, say a prayer and chuck the ball. The Lord only knows what'll happen after that." – Louis P. Masur, Autumn Glory

The sport's premier star of the 1890s, "The King of Swat" was one of baseball's first great power hitters. Ranking fifth all-time with a .346 career batting average, Delahanty hit .400 or better in a record-tying three seasons, and led the league in slugging percentage four times. A five-tool player long before the term came into use, "Big Ed" was inducted into the Baseball Hall of Fame in 1945.

Unfortunately, the temperamental superstar was addicted to alcohol and gambling, and became as well known for his binge drinking and betting on the horses as he was for his abilities on the field. When Delahanty got too far in debt, he begged his teammates for money and threatened to kill himself if they didn't help out. Despondent and flat broke, he boarded a Pullman train in Detroit, the Michigan No. 6 to New York, on July 2, 1903. Becoming a nuisance by smoking, drinking heavily, threatening riders with a razor, and damaging the train's emergency tool cabinet, conductor John Cole removed Del from the train in Ontario, Canada.

Since the train had crossed the International Railway Bridge, "Big Ed" decided to walk across the 3,600-foot span toward Buffalo, New York. Approached by night watchman Sam Kingston, who was on patrol looking for smugglers, angry words were exchanged between the two men. Delahanty began running toward the American side and either jumped or stumbled, falling 25 feet into the deep water of the Niagara River. His body was found 20 miles downstream at the base of the Horseshoe Falls by passengers riding the "Maid of the Mist" boat and was buried at Calvary Cemetery in his hometown of Cleveland. Dead at the age of 35, it's unclear if Delahanty died accidentally or committed suicide.

On October 19, 1901, Delahanty left the Philadelphia Phillies for the Washington Senators. In serious financial trouble due to his gambling and drinking habits, and the fact his wife was sick for some time, it's entirely possible "Big Ed" sold the trophy honoring his greatest season as a ballplayer at this point but we cannot be certain of the timing. We do know Del sold the silver pitcher to a banker named John Bauder who passed it on to his son John Bauder Jr. many years later.

Earlier this year, the trophy's existence and its equally amazing story came to the attention of John's niece only a few weeks before his passing at the age of 100. A World War II veteran and beloved schoolteacher, John Bauder Jr. had finally divulged the origin of the silver pitcher that had been displayed on his mantle for as long as his niece could remember.

Quite possibly the sport's first Most Valuable Player Award, the combination of Ed Delahanty's prowess as a baseball player, his tragic life, and the circumstances of his mysterious death adds considerable value to this 116-year-old trophy. It remains in phenomenal condition and could be considered the "Holy Grail" of sports memorabilia. 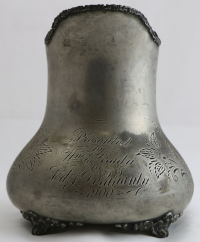 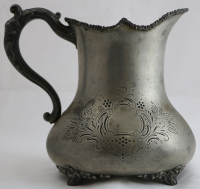 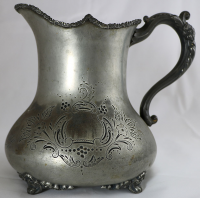