Mississippi Moms Raise 20k for "Where Are the Books That Look Like Me?" Campaign

Jackson, MS -- (ReleaseWire) -- 11/16/2018 --"Characters in children's books are almost always white, and it's a big problem." Washington Post, 2014. The problem is not new. In 1965 Nancy Larrick's article in the Saturday Review, "The All-White World of Children's Books" documented that just 0.8 percent of the children's books told contemporary stories about African-Americans. Things aren't much better today. When the Matt Maxx team asked minority children who their favorite black book characters were, they didn't have an answer.

Why is this a problem? When children can relate to the characters, they are motivated to read. This is not a hard problem to address with a solution-minded team of educators, authors, illustrators, and parents. Matt Maxx is a team of educators, kids, writers, parents, and illustrators developing the Big Monty chapter book series. Alison Buehler was a published author, but she knew this was not her story to tell. "I couldn't put black characters in my books and give them authentic voices and experiences."

It wasn't until she reconnected with a college friend, Lenora Winn, that a solution emerged. Lenora is a fantastic storyteller. The two women combined their skills to create the series and then added illustrator Chris Miller to bring the stories to life. Then, the entire community took on the project to make it a reality through a Kickstarter campaign which has already raised $19,000 called, "Where are the Books that Look Like Me?"

Big Monty and the Lunatic Lunch Lady, the first story in the chapter book series, is a book that children ages 7-11 love, according to field tests in public school settings. The team is distributing 1000 copies of Big Monty to schools, libraries, and Boys & Girls Clubs all over Mississippi. This project wants to give all children heroes and role models that inspire them to read.

These laugh-out-loud adventures feature fifth-grader Merlin Montgomery, a sensitive kid who navigates between his love of the great astrophysicist Neil deGrasse Tyson, and his desire to be accepted by A'lo Jenkins, the school champion of yo' mama jokes. Merlin hates his name and tries unsuccessfully to get everyone to adopt his self-given nickname, Big Monty. 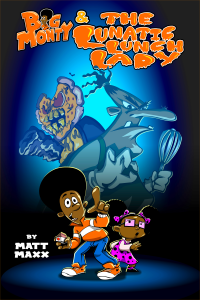