Lexington, MO -- (ReleaseWire) -- 09/12/2018 --The Lafayette-Lexington Daughters of the American Revolution (DAR) Chapter will be hosting a rededication at 10am on September 17th, 2018 to mark the 90th year anniversary of the Missouri Madonna of the Trail monument in Lexington, Missouri. The Missouri "Madonna" is one of twelve monuments to the pioneer mothers along the National Old Trails Roads which ran through Maryland, Pennsylvania, West Virginia, Ohio, Indiana, Illinois, Missouri, Kansas, Colorado, New Mexico, Arizona and California.

The Madonna of the Trail is a pioneer woman clasping her baby with her young son clinging to her skirts. The face of the mother, strong in character, beauty and gentleness, is the face of a mother who realized her responsibilities and trusts in God. It has a feeling of solidity - a monument which will stand through the ages. The figure of the mother is of heroic proportions, standing18 feet tall in totality and made primarily of Missouri granite.

The organizing chairman, LaVeda Cross, has been the MSSDAR State Chairman of the Madonna of the Trail monument in Lexington, MO since 2002. She was the organizing chairman of the 75th, 80th and present time the 90th rededication. She oversaw the planning and dedication ceremony in 2006 of an historical marker for "The Madonna." Cross reflects, "Each dedication has made it's own history."

"It's exciting for me to be have been a part of all of the rededications," Cross said. "I have grown to love the monument, as you can imagine. Having reached the grand old age of 85, I am not sure I will be the one planning the 100th!"

Originally, the monument was dedicated on September 17th, 1928 by Judge Harry Truman, who later became 33rd President of the United States of America. The monument faces ever Westward, almost midpoint on the Old Jack's Ferry Road leading down to the Missouri River in Lexington, where U.S. Highway 24 and State Highway 13 meet.

In 1909, a group of women joined together with an idea to locate the Old Santa Fe Trail in Missouri and mark the trail with monuments. The idea further developed into plans for an Ocean-to-Ocean Highway as a memorial to the Old Trails and our Nation's covered wagon days. In 1912, the National Old Trails Road Association came into being to assist the Daughters of the American Revolution (DAR) with the plan.

In 1924, the plan for the proposed monument was changed from a small cast iron marker on the Trails to a new plan which involved the erection of 12 large markers. In 1927, "The Madonna of the Trail" was accepted by the DAR's 36th Continental Congress as the monument that would connect each of the 12 states through which the National Old Trails Road passes. The Association, under the guidance of its president Judge Harry S. Truman, guaranteed the expense of erecting the monuments.

A Lexington woman, Ms. Mary B. China Chiles, who was Regent of the Lafayette-Lexington Chapter DAR at the time, diligently devised a creative pamphlet listing twenty three reasons for placing Missouri's DAR monument "The Pioneer Mother" at Lexington. The pamphlet was submitted to Mrs. John Trigg Moss, General Chairman of the National Old Trails Committee DAR in August of 1927. Among the reasons given was Lexington's location on the original Old Trails Road, laid out in 1821 by the first court of Lafayette County. Also, Lexington had led the fight for the first cross-state highway designated in 1911, and the Santa Fe Trail and Boone Slick Road Association, formed in Lexington, was the precursor of the National Old Trails Road Association.

Missouri's Madonna of the Trail was the fourth monument to be dedicated. The final monument was dedicated at Bethesda, Maryland in the week of April 19th, 1929. This completed the memorialization of the trail of a young nation as they traveled across the Allegheny Mountains to make their homes in the great western wilderness.

About Lexington, Missouri
Meticulously preserved on the river bluff, Lexington offers a chance to experience the vast treasures of our shared national heritage. Small-town charm permeates the streets of Lexington, and our visitors feel a belonging with our community as we graciously open our doors to share the ways of the past. Our community cherishes our history and brings it to life through high-quality, intimate living history events. We hope you'll join us to share in the stories that are deeply woven into the tapestry of our nation. Lexington is your gateway to Lafayette County. Contact us for information on Civil War events, attractions, lodging, dining, events, group tour itineraries, step-on guides and tour arrangements. 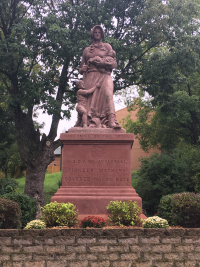