From the opening anti-materialism “Tell Me Now” to the closing petition “Who Will Testify,” Miranda also addresses homelessness (“Logan Park”), gun control (“Circle of Clowns”), apathetic love (“Two Lifetimes”) and animal abuse (“Addy’s Song”). Already hailed as a voice for change, Rev. Lennox Yearwood, Jr. of the Hip Hop Caucus said of the singer, "Robert Miranda calls us to action with the power of music in support of the ever-increasing challenges against poverty, social inequality, gun control and climate change… reminding us we should act and sing fearlessly.”

A labor of love, the self-released album was primarily recorded and mixed in Miranda’s home studio. Venerated FOH Sound Engineer Horace G. Ward (Usher, Lady GaGa, Beyonce, Prince) lived with Miranda for weeks at a time while mixing the album. “To mix Robert’s Exposed album was a treat for me,” Ward said. “It’s an eclectic mix of moods and rhythms that showcases his passion for music and highlights his great writing ability.”

Miranda spent most of his life following the dreams of his family, successfully working as an electrical engineer, salesperson and lobbyist. It was not until his recent marriage to his wife Joan (to whom he dedicates the album) that he realized he needed to follow his musical ambitions. "Robert is living the dream of every 50 year-old; going back to pursue something that he always wanted to do in his life but never got around to doing,” BMI’s Dan Spears said. “For some, it might be climbing Mount Kilimanjaro; for others it might be ski-diving; for Robert it is writing and producing his first full length album. I admire him for working hard to achieve his dream. We can all live vicariously through his efforts and his passionate songs.”

Exposed track listing
-Tell Me Now*
-Born in The Moment
-Two Lifetimes
-Addy’s Song
-On This Day
-Circle of Clowns*
-Forgiving One
-Logan Park
-Charles B.
-Morning Light
-Play For You
-Who Will Testify*

About Miranda
Miranda has studied guitar and music theory with The Peabody Institute’s Lawrence Hoffman, Sanjay Mishra (known for his Blue Incantation collaboration with The Grateful Dead’s Jerry Garcia), and Herman Meyer of the Washington Conservatory of Music. 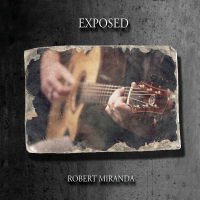