Just in Time for the 2019 Holiday Season of Giving and before the start of 2020, Gary Barbera and His BarberaCares Programs Increase their PSA BigBelly Solar-Powered Recycling Kiosk Footprint Initiative in Philadelphia and Freshen up all the Artwork of their Hometown Heroes

Philadelphia, PA -- (ReleaseWire) -- 10/15/2019 --Gary Barbera's on the Boulevard and their BarberaCares Program proud recipients of the prestigious Family Business Awards for Community Service Excellence and the Corporate Philanthropy award for regional charity from the Lenfest Foundation have doubled-down their efforts to keep the streets of Philadelphia litter free while subsidizing the costs of recycling. Barbera's Bigbelly transforms public space waste management with a cloud-connected system. Smart waste Stations communicate real-time status to an actionable web-based software. Communities benefit from optimized & streamlined operations, beautified public spaces & reduced carbon footprint. All while providing Public Service Announcements for their Hometown Heroes the AACR, Roxborough and Northeast Family YMCA's, and their very own Gary Barbera's Coats for Kids.

These newest additions and PSA artwork freshen-ups allow the BarberaCares Programs to encourage Philadelphians to recycle plus to donate to the charities that need support.

BarberaCares Programs strategically chose the locations WHERE THE PEOPLE ARE for their Solar-Powered Recycling Kiosks to efficiently maximize their use for litter disposal and cleanliness and optimization of visual appeals for charitable support in densely populated areas. Choosing locations on the Avenue of the Arts near the Kimmel Center which welcomes thousands of visitors annually, City Hall Courtyard where our city representatives and other city employees sit outside during breaks, and many other locations on South, Chestnut, Walnut Streets and Penn Square as well as Rittenhouse Square. Gary Barbera and his BarberaCares Programs are working to bring these state of the art "trash" cans to underserved areas where they are desperately needed.

The Pink Solar-Powered Recycling Kiosks champion The American Association for Cancer Research. The BarberaCares Program has proudly supported their commitment to cancer research, development grants, and finding cures for all types of cancers. BarberaCares has partnered with iHeart's Annual June Sista Strut an event to increase breast cancer awareness and celebrate the survivors of Breast Cancer within the African American communities with proceeds directly supporting the AACR. iHeart for their Annual October Bid for Breast Cancer with all proceeds benefitting the AACR. The AACR is located right here in Philadelphia on Chestnut Street. See two of the 30 Pink Kiosks at 15th and 17th at Chestnut.

The BarberaCares Program has been a supporter of the Roxborough YMCA for 30 years when Gary Barbera opened his first dealership on Ridge Avenue in Roxborough he and brother Gene were quick to join the Roxborough YMCA board to assist with fundraising. Just helped to raise enough money for 100 children to attend this year's Summer Camp free of charge. The Barbera Family was born and raised in Northeast Philadelphia and Gary Barbera's on the Boulevard is located in Northeast Philadelphia, partnering with the Northeast Family YMCA over the many years is a given. These beautiful PSA's can be seen at Broad and Chestnut Streets, Broad and Walnut near the Bellevue, Broad and Callowhill and 25 other points of interest.

The Annual Gary Barbera's Coats for Kids Campaign is the highlight of all the charitable community initiatives that are near and dear to the hearts of the BarberaCares Program. This year Gary Barbera pledged to donate 1,113+ winter coats to Philadelphia children more than any year previous. This opportunity is a direct pathway to help the children in his community and it was in perfect alignment with the BarberaCares Programs. "Kids in the Philly area need coats to stay warm during these cold winter months, we didn't realize how much of a need there is for coats for kids." said Barbera. It's a great privilege to be able to provide these necessities and to feel the excitement of the children and the gratefulness of the families; it's truly rewarding." The festive Gary Barbera's Coats for Kids Kiosks can be used at Broad and Pine, 17th and JFK near the Comcast Center, 18th, 19th and 20th and JFK- where many Runners line up for marathons and at the Cecil B. Moore Station

These PSA partnerships of Gary Barbera and his BarberaCares programs align perfectly with cleaning up the neighborhoods of Philadelphia. The solar-powered Recycling Kiosks not only help the aesthetics of community, they save money on trash collection, allow recycling options the are more cost-effective by holding 5x the amount of refuse, promote commitment to the environment, reduce the carbon footprint by reducing truck routes via modern technology while expressing the BarberaCares PSA's to remind the communities of valuable charities and organizations that need everyone's help.

Is Recycling, The AACR, The YMCA's, Philly Kids and BarberaCares Coats for Kids the Best? Boy I guess!

About Gary Barbera's on the Boulevard and his BarberaCares Programs
Gary Barbera's on the Boulevard proudly celebrates their 30th anniversary since swinging open the doors showcasing Dodge, Ram, Chrysler, Jeep and CPOV vehicles collaborating with it's own Philadelphia's Credit Connection- On-Site Instant Auto Credit. Over 1000 Vehicles including 300 Jeeps Cheap at one location. Barbera's on the Boulevard is recognized by FCA as Philadelphia's #1 volume dealer in both new and pre-owned vehicles for decades. Getting their start as a Dodge dealer has propelled them to be the #1 Dodge Dealer in 6 states, PA, NJ, DE MD, VA, and WV since the start while receiving Chrysler's highest accolade J D Power certification. 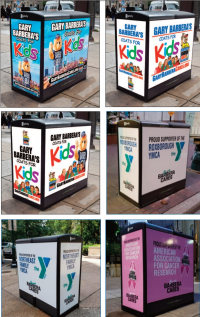