Waukesha, WI -- (ReleaseWire) -- 03/02/2016 --Monolith Engines, for the last 10 years, has been developing a new type of "one cycle" piston engine.  The company now owns three patents and is building a fourth generation single engine block.

To complete the first round of testing with a standard carburetor and then modify the intake to incorporate DFI (Direct Fuel Injection) necessary to bring the engine up to its expected performance level, the company has turned to global crowdfunding platform Kickstarter to raise an initial round of funding.

"The reason behind the new design was to create an engine that could burn natural gas or Hydrogen.  With the simple valveless design and the piston movement that has little friction the rings and be tighter allowing for less gas lost into the crankcase and allow for a higher compression and better combustion," says founder and creator Thomas Dougherty.

The engine is a four piston, single cylinder design that has two sets of piston pairs firing in both directions, therefor it needs to be supercharged to get air into the cylinder.  There are less than 75 components that make up the entire engine. (not including screws)   What makes this engine unique is both its simplicity and symmetry which almost eliminate piston slap and vibration, and eliminate heavy crankshaft weights.   A 2 liter engine is expected to weigh less than 85 lbs. and have a output of +300 hp.

"It so happens when designing a engine for this purpose it also works well with other fuels.  I see this engine being used by power utilities, especially in underdeveloped areas where high reliability and long life are important," adds Dougherty.

The product can be used for portable generators, air planes, motorcycles and other weight sensitive motive power devices.  Even though it runs like a two cycle there is no oil in the gas. Valves can be added for a very low pollution automotive product. The engine is especially designed for burning a mixture of hydrogen and natural gas or just run on either separately. The first product is being developed for a  high performance motorcycle.

This phase of the program constructs the total engine and runs performance testing with the motorcycle to built in the next phase.  All those who pledge will have access to the entire engine design, build and testing videos we plan to produce on this product.

The Monolith Engines One Cycle Engine is now live and available to support on Kickstarter: http://kck.st/1oIy83T

About Monolith Engines
Monolith Engines, for the last 10 years, has been developing a new type of "one cycle" piston engine. The company now has three patents and are currently in the process of building their fourth generation engine block. 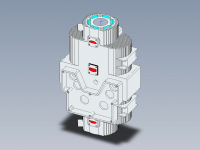