Monsters and Other Scary Shit, Now on Kickstarter

Do You Love Monsters? Odds Are You Do. Humans Have Been Fascinated by Monsters Since the Dawn of Time.

San Francisco, CA -- (ReleaseWire) -- 02/20/2017 --As books became more popular, so did the monstrous tales that frightened and excited readers with fantastical tales of legendary beasts. Even today, monsters thrive in the books, movies, television and video games we love, from the very cute, like in Adventure Time, to the terrifyingly scary, like in Dead Space.

Even though monsters are in every form of storytelling on the planet, they are often lumped into the horror genre. But monsters are so much more than horror. They are sci-fi, fantasy, comedy, drama, and everything in between. It's time they had the beautiful, hardcover love letter they so richly deserve, which celebrates every way monsters influence our lives for the better.

That's why Russell Nohelty decided to publish Monsters and Other Scary Shit, an anthology of comics that celebrates monsters in all of their glory, from the adorable, like Monsters, Inc., to the fearsome, as in Hellraiser.

Monsters and Other Scary Shit is a hardcover, 224-page monster anthology organized and edited by Russell Nohelty. Each comic is written and illustrated by one of the thirty different professional teams who have credits ranging from Marvel, DC, Vertigo, Oni, and Image, to brands like Star Wars, The Simpsons, Transformers, Invader Zim, and more.

This book doesn't just celebrate horror monsters. It celebrates all monsters. It's a glorious ode to monsters, written by monster fans for monster fans. There is one thing that true about every creator in this book; they love monsters. They've written and drawn monsters for years. They are obsessed with monsters, and their obsession comes through on every page.

Every story centers around monsters, whether supernatural, psychological, or funny, even as they wildly differ in subject matter, theme, and tone.

The book will be printed on the high quality, glossy art paper like you would find in professional art books, and bound in beautiful hardcover, with cover art by Aaron Alexovich, indie comic creator and artist for Invader Zim.

While Monsters and Scary Shit has been fully completed and compiled, one major obstacle stands in its way: printing. That's why Russell and his team have turned to Kickstarter in the hopes of raising the funds necessary to pay for printing and distribution. If they can raise $16,000 by April 6th, the book will be printed in glorious, amazing, breath taking hardcover which you can treasure for decades to come.

If you love monsters, comics, and anthologies, you have to check this one out. Every inch of Monsters and Scary Shit oozes the love and dedication that Russell Nohelty and his team have put into the book, and with reader support, this love-letter to monsters can finally reach the world. 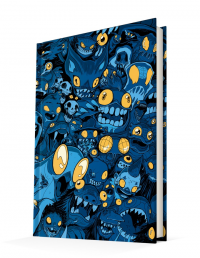