Pleasant Hill, CA -- (ReleaseWire) -- 02/04/2016 --The Remembering Matt Generosity Campaign (http://igg.me/at/FaoOkgOENpo) seeks to spread the anti-hazing message and give hope to parents suffering after the tragic loss of a child.

On February 2, 2005, Matt Carrington died after a night of torture. The hazing ritual that he was subject to involved intense calisthenics in a cold, basement that had been flooded with raw sewage days before. He was then coerced into standing on one leg while drinking gallons of water. Whatever didn't go down his throat, spilled over his body, which was being chilled with fans blowing on him.

Sometime after his second five-gallon jug of water, Matt's body began to give out. His kidneys shut down and his brain began to swell. When he had a seizure, the fraternity members left him to "sleep it off." No one called 911 until Matt quit breathing. By then, it was too late.

Matt's mother, Debbie Smith, MM, knew nothing about the horror her son was enduring. Over the coming days, weeks, and months, she learned about Matt's final hours and the extreme hazing he endured the last three days of his life.

"I cried everyday for the first three years." Smith said, "I worried that I would never be normal again." After meeting with a mother who had also lost a child, Smith realized, "Some day, I will be fine, just not today."

Smith learned the California Hazing Law was flawed. After the criminal case, she worked tirelessly to pass Matt's Law in the State of California. Governor Arnold Schwarzenegger signed Matt's Law on September 29, 2006.

1: Smith strives to throw a light on the problem of hazing. As long as humiliation rituals remain hidden, young people will continue to suffer. She speaks to groups of parents and young people about how hazing begins innocently, then escalates. She will also strive to get a Federal Hazing Law passed that is similar to Matt's Law in California.

2: Victims of hazing need to know they are not alone. Through AHA! (ahamovement.org), Smith works tirelessly to not only draw attention to hazing, but to also create safety for victims. Hazing victims feel shamed and isolated. They need to understand they are not alone and there a places of safety and healing.

3: Smith's passion is to give hope to parents who have tragically lost a child. She wants to make sure a book is available to share, so that even when a parent is, "In the deepest, darkest depths of hell because of the loss of a child, believing they will be there forever, one day, in time, they will come out of the darkness. One day they will smile again. One day they will laugh again, without guilt. They will be okay, one day." This will be a book of hope, love, forgiveness, and survival.

"A parent doesn't prepare for the possibility of a violent death of their child," said Smith. "When it happens, they do not have the resources to cope. They feel like they are going crazy, that they are the only one who has ever responded this way." 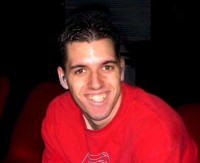