Version 14 of the popular PC video encoding tool, Movavi Video Converter for Windows, was released this week. This latest upgrade features a new transcoder engine that requires no additional codecs to be installed, triples or quadruples the speed of all types of multimedia conversion, and enables ultrafast format change with no loss of quality. The redesigned ready-made presets preserve maximum quality from the original videos and now include presets for iPhone 5S / 5C, iPad Air and Mini, the latest Android -based models, and other new mobile devices.

Novosibirsk, Russia -- (ReleaseWire) -- 12/04/2013 --Leading multimedia software publisher Movavi this week launches Movavi Video Converter for Windows version 14 with a new look and feel, following a similar upgrade to the Mac OS X version last month. Based on a reworked transcoding engine, Movavi Video Converter 14 for Windows is the optimum conversion software solution on the market for the price. Movavi’s encoder now offers SuperSpeed conversion, which delivers up to an 80-fold increase in performance compared with traditional technology, and preserves 100% of the original video’s quality. The new version supports over 180 multimedia formats and 200 mobile devices, including all popular video formats, Flash, HTML5 web-compatible video formats, unprotected DVDs, audio files, Apple’s iPad Air and Mini, iPhone 5S and 5C, Samsung Galaxy, Amazon Kindle Fire, and Google Nexus series, and many more. Smart ready-made presets are designed to maintain the maximum possible quality thanks to the automatic preservation of original settings, including bitrate and frame rate. The complete list of supported formats can be found on Movavi’s website at movavi.com/videoconverter/formats.html

According to Sergey Pavlishin, Movavi’s founder and general manager: “This is not just a regular update for us. Movavi Video Converter 14 is a completely new program, overhauled from the inside out. The technology is also now cross-platform, following the recent Mac OS X update. The two versions now have almost identical functionality and interfaces, enabling us to improve the software more efficiently in future”.

SuperSpeed: Fast Format Conversion and Editing
SuperSpeed conversion is the new faster way to change video formats and cut videos or extract movie scenes without re-encoding. If users don’t need to change any specific video parameters like codec, bitrate, or resolution, they can simply choose the preset marked with the SuperSpeed logo and the files will be processed up to 80 times faster than when using regular conversion technology. The same is true for video editing: the length of a video can be easily changed by moving beginning and ending markers on the timeline and choosing SuperSpeed processing. This enhances both speed and quality, as SuperSpeed conversion and editing results in zero loss of quality. Movavi's ultrafast conversion supports AVI, MP4, MKV, MOV, FLV, and M2TS files plus a number of popular mobile device presets like iPad and iPhone, providing more options than competing products.

Improved support for Intel HD Graphics hardware acceleration
Movavi Video Converter 14 supports Intel HD Graphics, as did the previous version; however, the processing speed has been increased by up to 20% per file when Intel acceleration is on. This latest version has also been enhanced for Intel SandyBridge, IvyBridge, and the most recent Haswell CPU series.

- Automatic deinterlacing of raw interlaced video camera footage, which makes the video smoother.
- Support for multi-channel sound input in PCM and Vorbis codecs.
- SmartFit settings for video height and width.
- The option to choose a subtitle track in the input file before conversion.
- Output video preview and video size prediction before conversion starts.
- Support for NVIDIA CUDA GPU acceleration for performance that’s up to 2.5x faster.

Price & Availability
A 7-day free trial version can be downloaded from the program’s official webpage at www.movavi.com/videoconverter.
A full personal license for Movavi Video Converter 14 can be purchased from www.movavi.com for $39.95; owners of earlier versions are eligible for a 30% discount. Business licenses for commercial use start at $59.95.

Journalists and tech reviewers are welcome to request a free license of Movavi software for testing purposes.

About Movavi
Movavi produces a wide range of multimedia programs to ensure users can get the most from their videos, music, and photos on any platform and any device. Along with over 20 standalone applications, Movavi produces a complete multimedia suite, which includes tools for video conversion, PC screen capturing, video editing and playback, online sharing and disc burning.

Since its establishment in 2004, Movavi has grown from a small startup run by just three enthusiasts, who produced and supported two products, to a global business with more than 60 employees and an expanding product range for PC and Mac sold in 150 countries. The company’s headquarters are in Novosibirsk, Russia, with regional offices in Moscow, Russia, and St Louis, Missouri, USA. 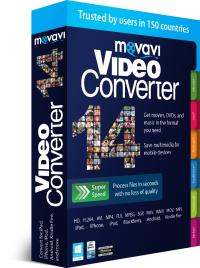