To be Produced, Developers are Offering Tech Courses and Video Game Development Opportunities to the Public, Christians and Non Christians Alike.

The game – which is expected to be released in Fall 2019, exactly 1 year after the crowdfunding deadline – follows Milos, his family and his Guardian Angel, River, in the supernatural – and completely customizable world - of Medjugorje. In the game, players can team up and chat freely with thousands of other like-minded Christians all over the globe. The game also has an optional secondary mode; a time-traveling love story where players control the outcome by making a dramatic series of choices.

"Playand chat freely with thousands of other players as you explore the supernatural world of Medjugorje. Seek out fun jobs, personalize your building… create unique clothing, food, drinks, furniture, and even throw your own party as you invite villagers and pilgrims from all over the world to visit your estate!", explains My Guardian Angel creator, Anton Gunaratnam.

What makes My Guardian Angel even more remarkable is that it will be designed to support the Mary's Meals Charity through in-game donations. It is set to help young people become proud, inspired Christians by offering 12-week technology-based classes to all those interested.

Courses will cover such topics as animation, computer programming, and virtual reality.

"At my Studio Academy, each year we have a full-day summer camp program in Film & Video Game making designed to include an option for teen students to come along with me to Travel & Tour the famous town of Medjugorje. This first-ever Travel & Tourism Production service of it's kind will coincide with the annual & week-long Mladifest Youth Festival. We will be there as if we were a Professional Team, researching and bringing back production material such as pictures, videos, stories, cultural artefacts, and others memorabilia that the students will later use as content in the projects they will make in the remaining month of camp after returning home. It's an exciting and adventurous experience we want to offer to the Youth", continues Anton.

After students graduate, they will get the opportunity to become a member of the Studio Academy team with chances to work on the project.

About My Guardian Angel
My Guardian Angel is the creation of Anton Gunaratnam, a young video game developer and youth workshop instructor based in Toronto, Canada. Roused by evangelical inspiration, Gunaratnam is asking for backers to donate to his Indiegogo crowdfunding campaign so that he and his team can bring the mystical world of Medjugorje to life.

The $184,257 Gunaratnam is asking for will be used to set up his Studio Academy in a shop within the Bramalea City Centre Shopping Mall whereby he and his team will train young people the 'Cartooning in Film & Video Game Making' curriculum, and of course, where they will produce, maintain, and merchandise products to be distributed upon final release of the game.

Gunaratnam hopes that My Guardian Angel will positively impact the Christian Youth of today and aspires to create franchise opportunities of the game and training centers soon. 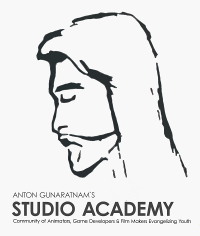