MyFEDBenefits is hosting a special giveaway for USPS workers on their Facebook page this holiday season, from December 13th through December 20th.

Waco, TX -- (ReleaseWire) -- 12/14/2018 --To recognize postal workers for all their hard work during the holiday rush, MyFEDBenefits is hosting a holiday giveaway on their Facebook page from Thursday, December 13th through Wednesday, December 20th. Nominate a fellow postal worker whom you feel has gone above and beyond in their job for a chance for both of you to win a special prize pack.

MyFEDBenefits knows how hard the United States Postal Service works, so in the spirit of the holiday season, they want to say thank you by awarding 10 lucky winners a prize pack that includes a Starbucks gift card and MyFEDBenefits fuzzy hat. And since it's the season of giving, they're asking you to nominate a fellow postal worker to win with you.

To enter this giveaway, comment on their pinned Facebook post with a favorite memory or heart-warming story about one of your coworkers at the United States Postal Service. Share why you think they deserve to win something extra special this year for a chance for both of you to win. The giveaway runs through December 20th, after which time a panel of judges will select the 10 winners.

The holiday season brings with it lots of extra work for the United States Postal Service. Due to the large influx of packages that need to be mailed throughout November and December, it becomes increasingly harder for postal workers to keep up, which often results in a USPS holiday slowdown.

This year, the USPS states that they are expecting to deliver nearly 15 billion pieces of mail and 900 million packages between Thanksgiving and New Year's Day. Staying true to their motto, "neither snow nor rain nor heat nor gloom of night stays these couriers from the swift completion of their appointed rounds," USPS employees work tirelessly all season long. From shipping care packages to troops overseas to delivering children's letters as part of their #LettersFromSanta program, postal workers help make everyone's holiday season a little brighter.

Help MyFEDBenefits recognize the hard work of your fellow USPS workers from December 13th through December 20th. "Like" the MyFEDBenefits Facebook page and share a comment with your nomination for a chance to win their USPS holiday giveaway.

About MyFEDBenefits
MyFEDBenefits is a free resource for all federal employees, providing assistance with benefit and retirement questions and challenges. 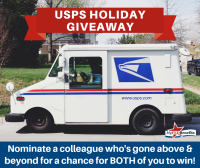