Santa Monica, CA -- (ReleaseWire) -- 01/22/2016 --MyndGazer Inc today announced that the Kickstarter campaign for MyndGazer, it's neurofeedback in Virtual Reality platform, has now gone live on Kickstarter here: Using a simple, cheap and readily available, consumer EEG (electroencephalogram) device to pick up the users brainwaves, MyndGazer visualizes changes in those brainwaves as changes in geometric figures floating in 3D space and visible in a Virtual Reality HMD (Head Mounted Display). "We've been developing with the Oculus Rift" said Sam Scoggins, inventor of MyndGazer, "although our output in hardware agnostic." MyndGazer's output is in webVR, and will be viewable in any HMD that can display webVR enabled webpages, including Google Cardboard.

The application has five preset levels, named after the traditional elements; Earth, Water, Air, Fire and Space. Each element is represented by a characteristic geometrical shape: Cube, Sphere, Pyramid, Cylinder and Torus. When we see in our HMD the sphere, for example, it is spinning in space, hanging in front of us, made up of a myriad of tiny golden particles. The brainwave signals from the EEG effect the sphere so that the more attentive the user is, the larger the sphere appears, the more distracted the user the smaller the sphere. The more meditative or relaxed, the slower the sphere rotates, the more stressed the user the faster it rotates. "We are still experimenting to find the most effective kinds of feedback to give." Says Sam, "It is already clear to us that the feedback effects are very powerful and immediate due to the immersive nature of the VR experience." People who don't yet have a Virtual Reality headset, or who don't like them, can still see the output of the game in 2D on a monitor or TV.

"I had a vision about a year ago, literally a vision. I was making a documentary about the nature of the human mind and one day after filming a Tibetan Buddhist teacher discussing creativity I had a kind of daydream. I saw a shower of golden particles slowly form into a sphere in front of me - somehow I knew it was reacting to my brainwaves and I realized with the technology we have today it was possible to build a system to do this. So I set out to develop what has become MyndGazer."

About MyndGazer
The application is at the intersection of several exciting fields at the moment, the burgeoning interest in mindfulness and meditation, brain training, VR gaming and wearable health tech. There are "neurofeedback" games in 2D using the brainwaves coming from wearable EEG's that are being trialled for use in the treatment of Attention Deficit Hyperactivity Disorder and similar conditions. MyndGazer is the first such neurofeedback game which works in Virtual Reality. 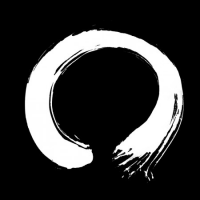 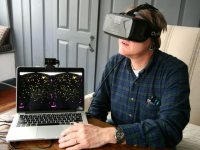