National No Smoke Day Is a Movement Challenging Americans to Quit Smoking on October 3, 2016

Los Angeles, CA -- (ReleaseWire) -- 08/31/2016 --Lung cancer is the leading cause of death for men and women in the United States. On October 3, 2016, National No Smoke Day will culminate a viral wave of awareness that encourages smokers to give up the habit. The movement is currently live on Kickstarter and raising funds to bring the project to life.

Cigarette smoking is responsible for more than 480,000 deaths per year in the United States, including nearly 42,000 deaths resulting from secondhand smoke. This accounts for about 1 in 5 deaths annually according to the Centers for Disease Control and Prevention.

Luke Cheney, founder of National No Smoke Day, chose October 3rd as the date because it has a special meaning for him. In 2004 he saw his best friend's mom, Susan DeWitt, get diagnosed with stage IV lung cancer. During her time in chemo she started a foundation and enlisted Luke to help her create a documentary that would discourage teens from smoking.  The video grabbed national attention when it was featured on Good Morning America but sadly on October 3rd, 2007, Susan lost her battle with lung cancer. 9 years later, Cheney still carries Susan's message with him.

National No Smoke Day will be the day where all cigarette smokers are challenged to quit for just one day. "The goal behind it is that hopefully on the following day, they create a plan to quit for good, with a strategy that works for them," said Cheney.

To drive awareness, the creators behind the project plan to launch several short videos to help spread the word. These videos produced will be the "megaphone" for No Smoke Day and the vehicle for spreading the message to the rest of America.

Cigarette Stu will be the leading character in the videos. Stu is an oversized physical representation of the negative aspects of smoking. In one of the videos, Stu will be revealed as a boxer throwing jabs at a punching bag that is in the shape of lungs. The tone of all the videos will be tongue in cheek, with the intentions of being shared across various social media channels to spread the word.

"With National No Smoke Day, the challenge is for people to quit for just one day. And then maybe on that second day, they take it a step further," adds Cheney. "Maybe they create a quit plan or maybe they get a friend to become their sponsor. What happens next is up to them. We just want to spark the snowball effect by creating 3 memorable and influential videos that will make National No Smoke Day go viral."

The National No Smoke Day Project is currently live and available to support on Kickstarter: http://kck.st/2bA9V9q

About No Smoke Day
Luke Cheney is the founder of No Smoke Day. The project launched in the Summer of 2016. No Smoke Day challenges all cigarette smokers in America to quit smoking for just one day. The project is made up of filmmakers, social media experts, and event planners from around Los Angeles. Cheney was previously part of the Susan L. DeWitt Foundation for Extended Breath.

For more information on No Smoke Day, please visit http://www.nosmokeday.com 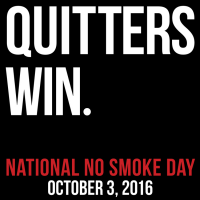 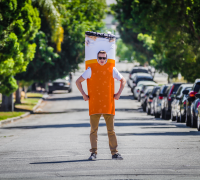