Nutmeg Life Soccer Game was designed by TB Games. It is available for Android on Google Play and allows the player to test their skill.

Staten Island, NY -- (ReleaseWire) -- 04/11/2016 --For soccer fans who cannot wait for the 2018 FIFA World Cup, which will be the 21st FIFA World Cup and held in Russia, TBZ Games has some good news. The popular gaming studio is pleased to announce they have launched their new Android video game on Google Play. Nutmeg Life Soccer has been described as one of the most exciting new soccer games of 2016, bringing players hours of fun on their Android devices.

The new nutmeg game has gained a great deal of attention from game reviewers and Android gamers alike. It's a one of a kind game that tests the skill of the player. The team at TBZ Games came up with an idea and took it forward to provide players with an addictive soccer game that would be hard to put down.

Sam Jackson, who gave Nutmeg Life, a five-star review said: "Really cool soccer game. Love the game play and the whole idea of the game. I maybe love it because I play the sport and love to nutmeg my opponents :)"

Isabelle Boileau, who also gave the game, five stars said: "A really awesome game very relaxing and extremely addictive one of my favorites."

To learn more about Nutmeg Life or to download the game and become the next David Beckham or Cristiano Ronaldo and beat the defender, please visit https://play.google.com/store/apps/details?id=com.TBZGames.NutmegLife&hl=en

About Nutmeg Life
A simple to use nutmeg game for all soccer fans. It has become one of the most talked about soccer games of 2016 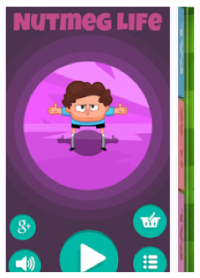