Santa Monica, CA -- (ReleaseWire) -- 10/03/2019 --Filmmaker Linda Shayne wore a blue panama hat when she accepted a Directing Award for "Mirror Image" at the Freedom Festival International in South Carolina. Shayne explained that she wore and tipped her late father's hat, to dedicate the award to him. "The movie explores duality and the internal struggle we have as individuals, about what we will each sacrifice for freedom and democracy. The twins are a metaphor for that personal battle."

"Having the film shown in competition at the Big Apple Film Festival in New York City, near the anniversary of the September 11th tragedy, made it all the more poignant," added Shayne's co-producer, Max Vought.

Shayne described an unexpected encounter she had with Homeland Security officers and the Los Angeles Arson-Explosives Bomb Squad. "While we were still editing, we disposed of the props, including fake bombs, at the Santa Monica Recycling Center. Although I explained they were movie props, the line of communication broke down and someone reported the props as suspicious potential explosive devices."

Shayne recounted, "A few hours later, detectives had tracked my car to my home, and a small drone buzzed around and surveilled my office. Two plainclothes detectives and three uniformed police knocked at my front door. I quickly showed the officers the movie footage of the fake bomb props on my computer screen."

Shayne was told she had to accompany officers in their police car to a remote Bomb Squad Command Center RV that had been set up to deactivate her prop bomb. She called out to her co-producer, Max, who had been hiding out in the kitchen, to join her. At the Bomb Squad remote site, Homeland Security and a member of the Arson Team questioned her and then explained that they had tested the prop device in a bomb disposal containment vessel and determined it was not active. A Bomb Squad officer noted how real the prop looked. Shayne was surprised, as when she first saw the prop, she thought it looked a bit "cheesy", but the officer assured her it looked very real. Shayne thanked them for their diligence.

Shayne continued, "It was an intense misunderstanding, with real life imitating art. We had just made a movie about a field test with agents working to deactivate planted bombs and now the officers had lived out the film." Mirror Image TRAILER

Shayne wrote and directed "Mirror Image" as a proof of concept for a TV series or series of movies "for a Netflix, Apple, Amazon Prime or HBO or Showtime", she explained. Shayne graduated the University of California at Berkeley with highest honors and has written and directed indie films distributed by Paramount and Warner Bros.. Shayne is currently writing an edgy TV pilot and is in discussion about her next projects, as "Mirror Image" continues to screen in film festivals in Los Angeles, Lisbon, Oaxaca and England. Linda Shayne 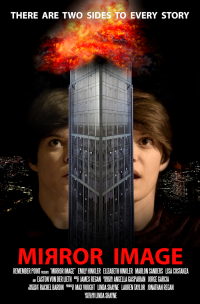 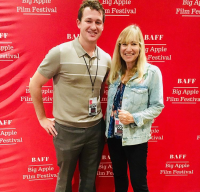