Intermountain Healthcare hospitals, leaders, and community partners are drawing attention to the issue of suicide in a unique way.

Vonk said the inspiration for the sign came from the Hope Wall at Bear River, a suicide prevention project that was started last year by Intermountain Primary Children's Hospital. In addition to Bear River, Hope Walls have been in place at Primary Children's in Salt Lake City, McKay-Dee in Ogden, and Intermountain Medical Center in Murray, with plans to add them to Layton Hospital, Sanpete Valley in Mount Pleasant, and Cassia Regional in Burley, Idaho.

"When I first started at Bear River, there were these sticky notes on this Hope Wall, and as I started to read them, it was extremely touching to me," Vonk said. "These were members of our community who were giving uplifting words of encouragement to other community members who were facing depression and thoughts of suicide."

The Hope Wall struck a chord with Vonk because it reminded him of a time years ago when similar thoughts entered his own mind.

"I remember vividly feeling this way and even started at one point to start to take steps in that direction," Vonk said. "Now normally one would be embarrassed to say that, but that's the problem. We have to stop being embarrassed. We have to start being willing to share some of these thoughts because now, I look at my life many years later, and it's a beautiful, beautiful thing."

Vonk said that while the electronic sign may advertise community events and various happenings at the hospital, its main purpose is suicide prevention and awareness, with healing messages written by members of the community.

Carrie da Cruz is a suicide awareness and prevention advocate in the Bear River area who lost her husband to suicide a decade ago.

"I think there are some people in our community who say, 'People in my family, I don't need to worry about them. We're just not those kinds of people,'" Cruz said. "I had those very same thoughts before I lost my husband. It wasn't until the day I lost him that I realized it can happen to anybody."

Cruz said awareness and prevention efforts are most effective when everyone in the community is involved, and Bear River's new billboard embodies that spirit of inclusiveness.

Cruz said the stigma and shame people attach to suicide often keeps people from talking about it — and that's a major part of the problem. So is the myth that talking about suicide might increase the chances of pushing someone over the edge.

Vonk added, "I'm not going to try to convince you that this electronic billboard is going to make a drastic improvement in our cities to reduce suicide, but at the same time, I think we have to start somewhere. We have to start having the conversation, and I think this board helps us do that."

Facts about suicide in Utah and the nation:

- Utah has the sixth highest suicide rate in the nation.

- One in 15 adults and 1 in 5 youth in Utah report having serious thoughts of suicide in the last year.

Intermountain is working to help caregivers and other community organizations prevent suicide through a comprehensive Zero Suicide initiative by:

- Improving access to behavioral care, in part by adhering to our own best practices to screen, assess, and develop safety plans.

- Preparing our workforce to know how to talk about suicide and help those at risk seek help and create safety plans.

If you or someone you know is struggling with thoughts of suicide, please call the National Suicide Prevention Lifeline at 1-800-273-8255.

About Intermountain Healthcare
Intermountain Healthcare is a not-for-profit system of 24 hospitals, 215 clinics, a Medical Group with 2,500 employed physicians and advanced practice clinicians, a health insurance company called SelectHealth, and other health services in Idaho, Utah, and Nevada. Intermountain is widely recognized as a leader in transforming healthcare by using evidence-based best practices to consistently deliver high-quality outcomes and sustainable costs. For more information, see intermountainhealthcare.org. 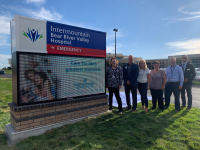