Combining linguistic and cultural anthropology with media studies and political economy, the book reveals how intellectual property and piracy can manage the gaps between digital content

The book, Digital Pirates, examines the unauthorized creation, distribution, and consumption of movies and music in Brazil and offers an experienced overview of piracy as indispensable to current capitalism alongside increasing global enforcement of intellectual property (IP). Complex and capricious laws might prohibit it, but piracy remains a core activity of the twenty-first century.

One of the major arguments of the book is that digital textuality helps us not only understand the productive brokenness of the current IP system but also the centrality of that brokenness to contemporary capitalism.

"Digital Pirates argues that digital technology has created an intellectual property standoff. One one side, the IP protectors (or "maximalists") fear piracy. One the other, the pirates rail against patent trolls, large corporations, and acquisitive mega-stars. Such battles about digital textuality manifest in different ways around the globe, igniting local debates about policing, expression, and imitation. Digital Pirates offers the idea of 'circulatory legitimacy' as a way to explain how both sides are talking past each other. Its aim is to open new spaces for policy, creativity, and governance."

Since 1998, Alexander Sebastian Dent has done extensive fieldwork in the state of São Paulo, interviewing and spending time with pirates, musicians, technicians, salespeople, filmmakers, policy-makers, politicians, and consumers. Research on the book was driven by an interest in the "pirated" music for sale in Brazil. Alex then realized that piracy and IP were intimately related to one another.

"Digital Pirates is an insightful and often beautiful exploration of digitization as a dissolving agent for older cultural forms, a catalyst for new ones, and a context for reconsolidating the boundaries that define markets, institutions, laws, and publics. Alex Dent moves fluidly between theoretical and empirical registers to weave a rich account of lived experience in Brazil that illuminates global cultural change."

"Smart, sly, and generatively disconcerting, Digital Pirates is an ethnographically textured and theoretically rambunctious charting of emerging mediascapes. Dent provides a complex and challenging account of contemporary Brazil and a principled exploration of the unpredictable resonances at the contested confluence of media, technology, regulatory regimes, and creativity. And he does so with piratical panache."

About Alexander Sebastian Dent, PhD
Alexander Sebastian Dent, PhD is an Associate Professor of Anthropology at the George Washington University, where he is currently the chair. He specializes in language, mediation, intellectual property, music, and piracy in Latin America (chiefly Brazil) and the United States. He is Associate Editor of Anthropological Quarterly, the PI of a grant to study teenage cell phone use in Washington DC, and a Research Associate at the Smithsonian's Museum of Natural History.

Alexander Dent is based in the Washington D.C. area and is available for interviews and public speaking engagements. For more information, or to arrange a review copy of the book or an interview with Alexander Dent, please contact: asdent@gwu.edu.

Digital Pirates is published by Stanford University Press and is available from Amazon.com in hardcover, paperback and Kindle versions, and from booksellers everywhere. 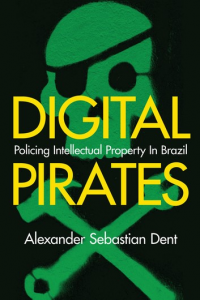 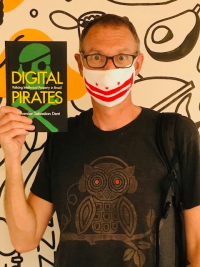