New Book Release - I Hope Nobody Sees Me, Memoirs of a Teenage Stroke Survivor

Sarasota, FL -- (ReleaseWire) -- 05/13/2013 --I Hope Nobody Sees Me, Memoirs of a Teenage Stroke Survivor, by Nicolas Sully is a raw, and at times explicit depiction, of an inner-city coming-of-age experience, made even more challenging by a debilitating stroke.

In Nicolas Sully’s first book, titled I Hope Nobody Sees Me, Memoirs of a Teenage Stroke Survivor, Nick tells how life changed dramatically after a stroke his 8th grade year. Relationships end, dreams end, but a new life unfolds.

Nicolas Sully was a typical kid going to an inner-city school. Nearing the end of his 8th grade year, Nick’s biggest concerns were football, friends and girls. Playing basketball one day in the school gym with his friends Nick gets a headache. Then his voice slurs. When he has difficulty putting on his shoes and vomits in front of the Gym teacher, school personnel call the ambulance.

Nick speaks his mind, with raw, and at times explicit depictions, of an inner-city coming-of-age experience. An experience made more challenging by his stroke. Nick deals with the transitions of school, relationships, and youth to manhood, all the while trying to control the emotional roller-coaster ride of a teenage stroke victim.

What a powerful story!

This is an outstanding book!

As a stroke survivor myself, I'm not sure what I was expecting from this read. Nicolas truly touched my heart with both his story and his courage. As a middle-aged professional when I had my stroke I know how terrified I was at times. Never did I expect to so totally identify with this young man's story.

We had so many touchstones in common it amazed me. I can identify with that overwhelming fear someone will "see" me. I felt for his pain of the fight to build a new life, losing friends, and learning to accept what's happened.

Good for young Nicolas who has now decided to go into the medical field as a result of his experiences.

This isn't a story just about surviving a stroke...it's for young adults, it's about life, and learning that when life knocks you down you get back up and keep fighting.

The ebook version of I Hope Nobody Sees Me, Memoirs of a Teenage Stroke Survivor, ISBN 9781622872725, published by First Edition Design Publishing, is available on-line wherever ebooks are sold. The 108 page print book version, ISBN 9781622872718 was published by First Edition Design Publishing and distributed worldwide to online booksellers. 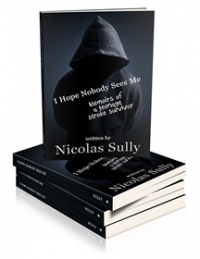