New Book Release - Islam: A Threat to Civilization, by William F. Russell, Asks the Controversial Question, "Is Islam a Religion, or Is It Something Very Different?"

Sarasota, FL -- (ReleaseWire) -- 06/26/2013 --William F. Russell’s book Islam: A Threat to Civilization confronts the controversial subject of Islam in America head-on. Russell contends Islam’s far-reaching ideals, such as Sharia Law, move it beyond ‘religion status’ and in fact threatens many of the freedoms Americans hold dear.

“Our country has always welcomed immigrants from all walks of life and from every religion. We protect religions in this country. But is Islam truly only a religion? Should Islam have “religion status”?

We must ask ourselves, can we allow a group of fundamentalist Muslims following the culture of Islam to freely attack our country, our Democratic institutions, our freedom of speech, our freedom of religion, our very civilization and get away with it?

What is the truth? What should be our position regarding Islam? Should we expose our culture to one which says it wants to dominate us and bring to us a set of laws known as Sharia, which will make a mockery of our freedoms and subjugate women to second class status?”

The author was born in New York City in November 1925 the eldest of three children of Dr. and Mrs. Frank H Russell. He graduated in 1950 from the University of Colorado with a Pre-Medical Major but spent much of his life in international business as a corporate executive and CEO. He has been an entrepreneur for the past 40 years. William is currently concentrating on writing. 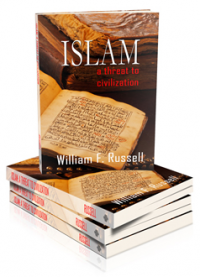