New Book Release - Jack and Jill, Not an Easy Climb, by Brenda Sue

Jack and Jill, Not An Easy Climb - The Tina Mucka Story, by Brenda Sue, is the real-life account of being born genetically male and female.

Boston, MA -- (ReleaseWire) -- 12/04/2013 --Brenda Sue’s book Jack and Jill, Not An Easy Climb - The Tina Mucka Story, is a rich account of the lonely life of Tina Mucka. Tina was born Neal Trudelle on December 24, 1943, the third son to a French Canadian family in Keene, NH. Neal was born with two distinctive hormones, one male, the other being female. In those day's doctors, let alone his naive parents, knew almost nothing about this condition.

“This is my incredible story. I had to live through the torture and hell that was associated with being born a male living inside a wrong body.” Tina Mucka

For years Neal felt out of place in his body. Feelings of inadequacy and loneliness led to depression and eventually he was subjected to 19 electro shock therapy treatments. Neal/Tina's encounters with the "gay" life, transvestites, and close friends that were like her in many ways, is portrayed vividly. Tina often lived in a self-induced fog of pills, alcohol and drugs she took to overcome her afflictions. Tina was admitted, repeatedly, to mental facilities and gives an accurate account of these experiences. A bit of happiness took place when Tina was married in the state of New Hampshire, the first ever, only to be annulled and remarried again years later. 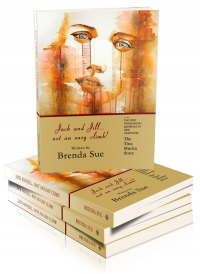