Muhammad (SAW), by Dr. Mohammed A. Lais uncovers the truth about the Prophet Muhammad (SAW), clarifies the reasons for misunderstanding between Islam and the West and highlights the prophetic teachings which help to build unity and peace amongst interfaith communities.

Given the general lack of knowledge about and misrepresentation of the Prophet Muhammad (SAW) over centuries, it has contributed to building a wrong paradigm in the approach to his life, character and teachings and has resulted in with misunderstanding between the Islamic world and the West.

These distortions have persisted for many generations and have been adopted by large sections of the western world. As a result the perceptions of Muslims have been skewed and stereotypes of their religion abound. This has led to the stigmatisation of Muslim communities and the Islamic faith worldwide. Muslims are being generally treated with hostility, resentment and bias. Often they are left feeling marginalised from the host society which creates huge distrust between interfaith communities and contributes to the view that Muslims are an obstacle towards social harmony.

However, there have been a huge number of works by non-Muslim biographers, rulers, historians, politicians, priests from interfaith communities etc throughout history and the contemporary period which have offered appreciations for Muhammad (SAW); and also in a series of interviews, many non-Muslim prominent personalities including MPs, Lords, Priests and chaplaincies of some leading universities, expressed their perceptions towards Muhammad (saw) and Islam. They made appreciations on his character, qualities, simplicity, humbleness, spirituality and relations with others which are relatively unknown and committed themselves to a truthful study of the Prophet's life, Qur'an and Islam. They represent a counter to the age-old charges which have been levelled against him. This book is an extensive investigation into this overlooked aspect.

About Dr. Lais
Having developed a career as a Career Adviser providing advice and guidance to students in education, and also achieved a PhD degree which brought me a' National Research Award', I have got a keen interest in research as well. I have been involved in many studies conducted by universities including Imperial College, University College London and Oxford University. Noticing a literature gap of this topic, I became motivated in conducting a self-funded research and this book is its outcome. It is a breakthrough in history. I am also working on my next book: 100 Most Influential Muslim Women in the History. 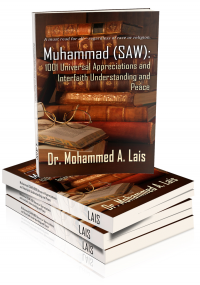